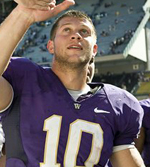 USC saw its chances for a spot in the BCS title game take a major hit even before we officially reached autumn. The Trojans' 16-13 loss to Washington looked eerily familiar to losses in previous years to UCLA, Stanford and Oregon State -- conference losses to weaker foes that hurt USC's national ranking. Five of USC's last six losses since 2006 have come to unranked conference teams.

This loss was about as bad as the 2007 one to 35-point underdog Stanford. Washington was 0-12 in 2008 and the Huskies finally broke a 15-game losing streak just a week ago by beating Idaho. USC, in contrast, was coming off a huge spotlight win at Ohio State and was ranked No. 3 in the AP poll.

USC now has to win out the rest of the way -- no easy feat with a trip to Cal looming -- then hope teams in front of them in the rankings stumble; it's deja vu all over again. Right or wrong, the Pac-10 does not get the respect of other major conferences, which is why a USC loss last season at Oregon State was deemed worse by the pollsters than Florida losing at home to Mississippi; that's life in the screwy BCS.

I was happy for Washington quarterback Jake Locker, who is the best quarterback in the country nobody knows about. He was terrific Saturday against USC and the win made up for a lost 2008 when he missed most of the season with an injury.