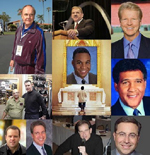 It seems in the last year I've been rolling my eyes more and more at blunders and dumb mistakes made by sports commentators. We'll highlight some of the gems we find here. We'd also love to hear about some that you stumble on. This little gem came from Phil Simms calling the Broncos-Eagles game a couple weeks ago, commenting on why the Broncos took the ball when they won the coin toss:

You do it so Philadelphia doesn't have the ball at the end of the first half and then the start of the second half, give them a chance for 14 points. ... Ya know, a lot of people don't think of that, that's one of the reasons why you want to take the ball on the opening kickoff.

I know Simms understands the rules of the NFL, so it's impossible to think of any reason for that comment other than some stiff bloddy marys before the game started.

Please leave sports blunders you hear either here or on our discussion board.