Share All sharing options for: Ohio State loses, so who's your No. 1? 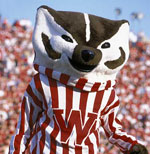 The first BCS poll will be out Sunday and the big question is who the top two teams will be. It won't be Ohio State, 31-18 losers to Wisconsin. The Buckeyes became the second straight No. 1 team to lose, following Alabama a week earlier.

Oregon, which was idle, will almost certainly be one of the top two, but after that it gets tricky. Boise State should be one of them, but there are rumblings that the Broncos will be screwed in the coaches' poll because of their perceived easy schedule.

The coaches do not have to reveal who they voted for, so can be as petty as they want to be. No way they should get a vote since any coach is only focused on his team, next opponent and conference. Plus, many coaches allow assistants or administrators to vote.

The other highly ranked unbeatens with a claim to an even high ranking are TCU, Oklahoma. Auburn, LSU, Utah and Michigan State. I would love to hear who college football fans think are the two best teams based on what they've seen so far (try to put your biases aside). I would take Oregon and Boise State -- I don't see how teams can be dinged for being idle (Oregon) or winning 48-0 (Boise State).

Update: Oklahoma and Oregon are 1-2 in the first BCS poll. Everything that's wrong with how major college football decides its title are summed up in this paragraph:

Boise State is No. 2 in all the polls and seventh according to the computers, but the math leaves the Broncos third in the BCS standings. “The computers do not like this team,” BCS guru [Jerry] Palm said.

Yes, because computers are experts about football. Ultimately, this is why major college football blows.