Share All sharing options for: U.S. beats Canada in hockey, 5-3 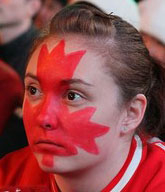 Woe, Canada! In an upset, Team U.S.A. beat Team Canada, 5-3, in men's hockey in a terrifically exciting and dramatic game. I had no rooting interest but watched all 60 minutes, aided greatly by the fact that there were zero commercials during any of the periods. It was a great sporting event.

While the loss was not the end of the world for Canada, it does mean that they have to play an extra game, while the U.S. wins the bracket and gets a bye. To win the gold, the only acceptable outcome Up North, Canada has to win four consecutive games. Canada is seeded sixth and plays Germany. The U.S. will be either the No. 1 or 2 seed.

Winning the gold will be a tough order for a Canadian team that needed a shootout to beat Switzerland, and lost to the U.S. despite outshooting the Americans, 46-22. Ryan Miller was a total stud in goal for the U.S., which never trailed. With the U.S. ahead 4-3 and less than a minute, Ryan Kesler scored an acrobatic empty-net goal to seal the game.

To all Canadian reading this, what was the significance of this loss? Is the country ready yet to slit its collective wrists, or is it at least sharpening the razor?