No. 1 seed Kansas loses in NCAAs

Share All sharing options for: No. 1 seed Kansas loses in NCAAs 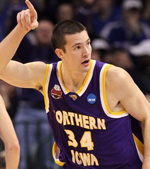 Well, so much for the Kansas-Villanova final I picked in the Outsports NCAA pool. Villanova, a No. 2 seed, lost to St. Mary's, but the even bigger stunner was Kansas losing, 69-67, to Northern Iowa.

I had not watched college basketball in the regular season, so when the pairings were announced it was interesting how many "experts" thought that Kansas was an automatic lock to make at least the Final Four. In our pool, 75% picked KU to make the Final Four and half to win it. Instead, the Jayhawks got outplayed by Northern Iowa (they led once, 2-0) and did not even survive the first round weekend. That's why they call it March Madness.