Share All sharing options for: Duke holds off Butler to win title 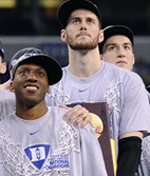 I was like millions of Americans hoping that Gordon Hayward's desperation, last-second shot would drop and give Butler an improbable NCAA men's college basketball title. But the ball caromed off the backboard and hit the front of the rim and out and Duke held on for a dramatic 61-59 win. It was the closest NCAA final since 1989.

There wasn't a whole lot separating the two, but in the end, poor shooting (34% from the floor) did in Butler. The Bulldogs had survived similar shooting slumps in their previous five games, but Hayward missed his last two shots, either that would have given his team the win.

Pretty much anyone outside of Duke alums hate the Blue Devils, but I found them less villainous than in the past. This is mainly because there is no pouty lightning rod on this team like J.J. Redick, Christian Laettner or Bobby Hurley, guys you wanted to lose just because. This Duke win left me shrugging my shoulders.