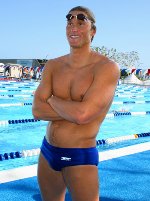 Equality California's "Swim For Equality" has garnered the endorsements of two Olympic gold-medal swimmers. Gary Hall and Lenny Krayzelburg (right) are both lending their support for the event that will help raise money to fight for gay rights in California. What makes this particularly newsworthy? Both swimmers are straight. Gary Hall said in a statement:

I believe everyone should have equal protection under the law, no matter what their sexual orientation. Issues of LGBT equality hit particularly close to home, as I have friends who are LGBT, some of whom have been afraid to come out of the closet. I see the work that Equality California is doing as so important to the welfare of my friends and all LGBT people.

I’m particularly thrilled to support the Swim for Equality. The sport of swimming has contributed so much to my life. It’s truly an honor to support an event that brings two of my passions – swimming and equality – together. 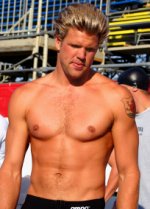 You may remember Hall (right) from his testimony at an anti-gay lawsuit brought against Outsports in 2004.

I’ve long found it unfortunate that so many gays and lesbians feel uncomfortable coming out in elite swimming and professional sports. I think Equality California’s Swim for Equality gives the sport of swimming a fun, fantastic way to stand up for equality. I look at everyone, no matter what their sexual orientation, as equal, and the law should do the same. I applaud and support all of Equality California’s work on behalf of the rights of lesbian, gay, bisexual and transgender people, including marriage equality.

It's awesome to see accomplished athletes like Hall and Krayzelburg not afraid to be so gay-friendly. These aren't two minor players in their sport; they are both well-known, well-respected swimmers. Kudos to them!