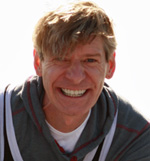 My name is James Scott. I'm 48 years young, gay, and (sadly) single. I live in New York City (Manhattan) and I'm an amateur figure skater -- F5, ISI #811001. I practice at Skyrink/Chelsea Piers where I have two coaches. My day job is as a professional costume designer for the theater. I've designed well over 100 productions in North America.I'll be competing in the Solo Creative Free Skate and the Solo Spotlight in Cologne. The music for the former is from the soundtrack of “Gone With the Wind” (Max Steiner, 1939). The specific cut is "Scarlett's Pledge" -- the end of the first act. I'll be wearing an interpretation of Leslie Howard' costume as "Ashley" in the "paddock scene.” 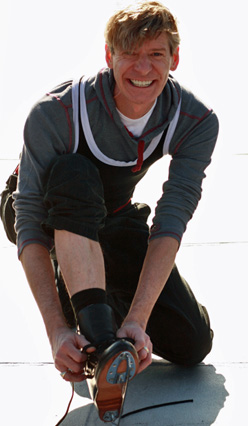 For the Solo Spotlight, the music will be from the film “Easter Parade” (Irving Berlin, 1948) -- specifically "Steppin' Out with my Baby." Needless to say, I'm a huge fan of classic movies.

I started skating as a pre-teen in Maryland. When I attended college at Brown University, I stopped. After graduating, I received an MFA from New York University. Since then, I've only skated periodically. Yet three years ago, I made a commitment to myself to compete in the Cologne Games. Living up to that commitment has not been easy. However, I had always dreamed of program skating and now it is a reality. (Program skating is very taxing. Imagine running as fast as you can, changing stride with strict choreography, and jumping in the air five times for two minutes and ten seconds. Try it.) In preparation, I've competed locally, and at the ISI Adult Championships in Lake Placid, New York.

I've never been to Europe; therefore this trip has special significance. I look forward to seeing the cathedral, the Rhine, and a day trip to Aachen. I'm anxious, eager, and scared to death! But then, even the super-elite never think that they are prepared . . .