I never liked sports. Living in Mexico City, the son of a gymnastics coach and a physical education teacher, I grew up surrounded by athletic masculinity. I never felt I was masculine or aggressive enough to practice anything, but I was forced to try everything: swimming, volleyball, karate, basketball, tennis and so on – anything that would, in opinion of my parents, make me more athletic, and I guess also more “straightish."

The result was always the same: I ended up quitting the physical activity, whatever it was, and trying to seek refuge from my feelings of inadequacy, gender issues, fear of my parents not loving me enough for my lack of sports skills, and deep down, from my fear of knowing that I was gay in a highly homophobic environment.
It was that same environment that pushed me years later to leave Mexico and seek a more understanding and free milieu, in Canada. I came out in Canada. I found a great place where I could be myself and have an openly gay life, albeit with the inconvenience of being an immigrant and outsider to the white dominant group. But I guess I was always an immigrant – I had never really belonged to my homophobic culture.

One day in Toronto, I discovered Triggerfish, a LGBTQ water polo team. It was July 2007, and I decided to attend the first session. I was so scared. Years of physical inactivity and smoking left me with an almost crippled body. I swam the first length and I was exhausted. But at the same time I was amazed by the fact that openly gay people were swimming in the facilities of the university, right out there, before the gaze of everybody, and it was totally fine. 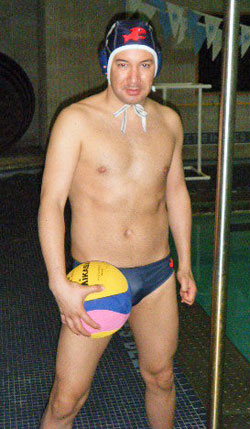 For the first time in my life I was not scared. It was fine to be gay. Actually, it was amazing. I had found water polo and Triggerfish, a team where I started making amazing friends and got my first interaction with the gay community in Toronto. My teammates have been very supportive of me, and being part of the team has made me feel at home in Canada, and that I have membership in this great society.

Triggerfish healed me in many ways, from my years of fears and internalized homophobia, from my insecurities and issues of growing up “different." Today, both my parents are proud of me practicing a sport. I quit smoking and I have considered taking water polo more seriously. That is part of the reason why I wanted to attend the Gay Games in Cologne.

When I was asked to write about my experience I had second thoughts about actually doing it. I thought my travelling to the Games was nothing special, other than the fact that I had the means to do it. It is not like I had to go through provincial selections or nationals; I did not have to beat any other players or teams to get the chance to attend the Games. But I guess I had to beat more important things, such as recognizing my sense of personal value, and accepting that my body could increase its capacity, and after each practice be better than before. More important than any of that, though, is the opportunity to be part of a network such as Triggerfish, where a bunch of people from different walks of life get together a couple of times per week to celebrate life, sport, diversity and being proud of who we are. My teammates are my family in Canada. I can’t wait to go to the Games, where people from all the world get together to celebrate diversity.