Share All sharing options for: France out of World Cup, Ireland rejoices 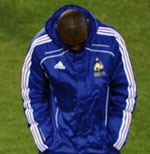 The only thing I'll miss about France not being alive in the World Cup is the comic relief from the biggest bunch of whiners, malcontents and underachievers in South Africa. In losing 2-1 to South Africa, France was officially eliminated from the World Cup. And no one is happier than the Irish, with free pizza for all.

In a final act of dickishness, French coach Raymond Domenech refused to shake the hand of his South African counterpart Carlos Alberto Parreira. Of course, what else would you expect from a guy who consults astrological charts for his roster moves and once used a post-match press conference after a crushing loss to propose to his girlfriend?

It was total justice that France was humiliated in South Africa since they never should have been there in the first place. If you recall, last fall France got an extra time goal to tie Ireland and win a tiebreaker that sent them and not the Irish to the World Cup. But the goal was clearly a handball by Thierry Henry, but since soccer remains technologically in the 17th century, no replay exists and the goal was allowed.

Sean O'Shea, a columnist for Irish Central, said the supernatural was at work:

A curse was put on the French team by the Irish nation after they cheated their way into the World Cup when Thierry Henry handled the ball before they scored the wining goal in the qualifiers against Ireland in Paris. ...

The spirit of Biddy Early, the Clare witch who cursed the Clare hurling team for over 60 years was invoked.

So was the spirit of the headless horseman, who gallops through the fields in the Irish midlands, bringing doom to all who encounter him.

The spirits did their work and France had a disastrous World Cup.

Whether it was spirits and just play on-field suckiness, the French are gone and the World Cup just got a lot better.