The blown goal in England-Germany

The worst performance in Sunday's Round of 16 World Cup matches wasn't by England but by the referees. In both the Germany-England game and the Argentina-Mexico match, the refs blew obvious calls that disallowed a goal in one and allowed one in the other. It's time for instant replay.

England scored what would have been the equalizer late in the first half against Germany, but the linesman was too far away to see it and he missed the fact that the ball clearly crossed the goal line. Germany went on to a 4-1 rout. In Game 2, an Argentine player was clearly offsides, but his goal was allowed, even when the ref consulted his assistant. Minutes later, a deflated Mexican side allowed an easy second goal.

There are no valid arguments against the use of replay in the World Cup, save for the fact that the soccer powers don't want it. They make baseball seem forward thinking in comparison. All of the ESPN announcers, regardless of nationality ripped the blown calls and supported replay and FIFA clearly has the money to use replay for a once-every-four-years event.

FIFA got lucky that the two blown goal calls against the U.S. in group play did not ultimately affect the standings. Likewise, the Germans were clearly superior and almost certainly would have bounced England anyway (ditto for Argentina over Mexico), but it would have been a much more interesting second half. The refusal to use tested technology that is employed successfully in other sports is baffling.

When every fan watching worldwide knows a call was blown, the argument against replay is shattered. With goals so precious in soccer, using replay in the goal area makes perfect sense and would remove the taint from games.

On a side note, English papers are always entertaining after a soccer loss by their lads. 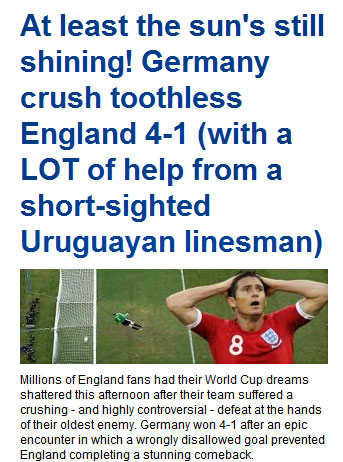 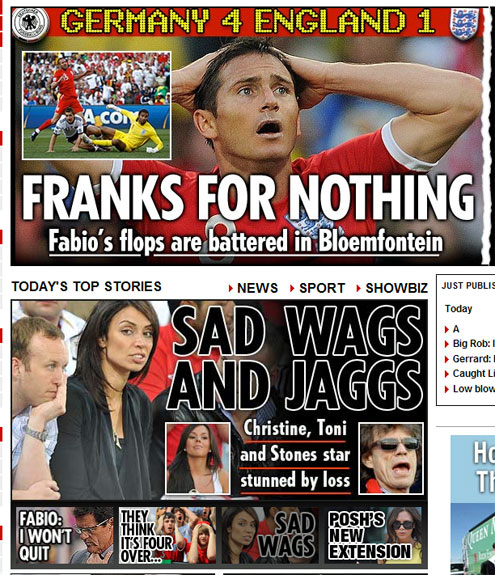 News of the World: 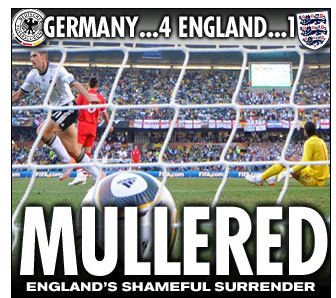 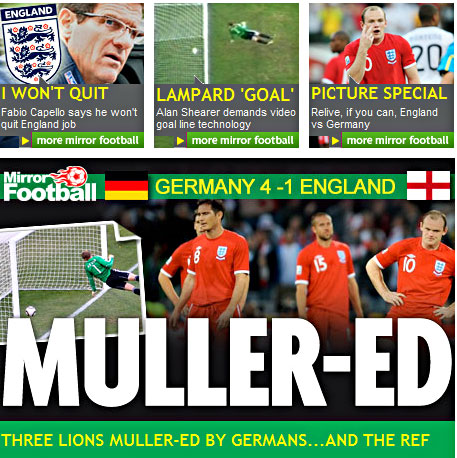