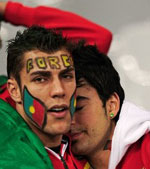 After an interesting round of group play games that saw teams like Italy and France get bounced and some new faces get in, the World Cup got really dull in the knockout round of 16. In fact, the most interesting moment of any of the eight games was the missed goal in England vs. Germany and the debate about replay.

All eight matches were instantly forgettable, with the Ghana extra time win over the U.S. being the one moment of drama. Yes, Paraguay-Japan went to penalty kicks, but that was a 0-0 snoozer that probably had people in Tokyo yawning.

Despite some fresh faces in the Round of 16, the tourney has been fairly predictable. Seven of the eight group winners (the U.S. being the exception) are still alive. And in neither round have there been comebacks -- the team that scored first is 50-2-4; so much for pulsating rallies. Even the shirtless action has been muted due to it being winter in South Africa.

Also, after 18 straight days of multiple games, there are now breaks between rounds. It's reminiscent of the NCAA men's basketball tourney, where the rounds of 64 and 32 are stirring and after that there are fewer games and fewer chances for memorable moments.

The quarterfinals, because of the group setup, have a feeling of imbalance. Heavyweights Germany and Argentina meet, as do Brazil and the Netherlands; either match is worthy of a final. In contrast, Spain (a pre-tourney favorite) gets dull-as-dirt Paraguay (which has scored a whopping three goals in four games), while Ghana-Uruguay does not get the pulse racing.

I'll continue to watch, but a lot of the sizzle left the tourney when the U.S. went out. I say that, not caring much about the American side, but because they played by far the most exciting games -- the 1-1 "Hand of Clod" match vs. England; the 2-2 game vs. Slovenia that featured a two-goal comeback and a missed goal by the refs; the high drama of Landon Donovan sending the U.S. on with his extra time goal vs. Algeria; and the extra time thriller vs. Ghana.

Here's hoping the Final 8 can give up some magic. So far, the thing I'll most remember are the incompetent refs and annoying vuvuzelas.