Gays said to be on German World Cup team

Share All sharing options for: Gays said to be on German World Cup team 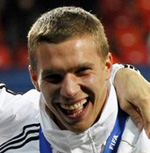 A weird post-World Cup story out of Germany, where the agent for injured player Michael Ballack (who did not play in South Africa) told a journalist for Der Spiegel that there were several gay players on the German team that finished third. The comments by Michael Becker have caused a stir because he suggests that there is jealousy toward Ballack by people Becker said were "supposedly mediocre, ugly, untalented, bureaucratic, provincial, unmanly or gay."

On the sidelines of a farewell match for footballer Bernd Schneider at Bayer Leverkusen, Becker told a group of agents and journalists in the Bayer clubhouse that there was a former player on the national team who was about to go public with the names of "the gay combo." I expected my fellow journalists to be all ears, but they seemed relatively blasé about Becker's remark. It seemed that every sports journalist was already familiar with the alleged homosexual conspiracy swirling around German coach Joachim Löw's team. The rumors accompanied the team to South Africa. They are apparently part of the package.

Apparently, the free-flowing, more elegant style of German soccer (a marked contrast to the regimentation of past team) is attributed in part to the presence of gay players, and the Spiegel writer Aleksander Osang wrote this about how the players celebrated on the field:

There was something soothing and liberating about watching this team play, and it was even more soothing and liberating to see the expressions of joy on the players' faces. They embraced each other when [Miroslav] Klose, who had been out of form all season at Bayern Munich, finally scored a goal again in the first World Cup match, and the team hugged him as if he had just recovered from a long, serious illness. Klose later said that [Lukas] Podolski wouldn't let him go -- and that it was a nice feeling.

Uh, if Podolski grabbed me and wouldn't let me go, it would be more than a nice feeling. But Becker suggested that the Germans ultimately fell to Spain in the semifinals because they weren't tough enough (presumably because of all the gay players). Reported the London Guardian:

Becker's remarks, which have been picked up across the German press, have attracted sharp reactions from the football world. A spokesman for Bayer Leverkusen, the club where Ballack began his career and to which he will return after his departure from Chelsea FC, said it was shocked by the remarks. "At Bayer Leverkusen we have absolutely no resentment towards homosexuals," it said in a statement. The German Football Federation, which is the sporting association with the largest membership in the world, refused to comment, while Löw said he "would not stoop so low" as to react.

But the comments have raised concerns that homosexuality remains one of the major taboos in the footballing world.

Becker would neither confirm nor deny the quotes to him, but said he was "misunderstood." The writer stands by his quotes.

I am not sure what to make of all of this, since Becker comes across as a bastion of the old guard of German soccer, who are threatened by a new style. Osang writes that the derogatory references to gays (one website translated Becker as saying "queers"), were "synonymous with something Becker could no longer understand." Like in America, where someone will use "fag" as an all-purpose put-down.

What's odd is that Becker seems to blame gays on the German team, when in fact this squad went much further than anyone thought and impressed the world with its wide-open and beautiful play. His comments spoke to the need for more gays on the team in 2014.