Share All sharing options for: Behind the German gay World Cup story 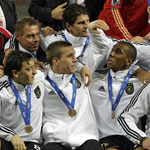 Gary N. Reese has reported over the years on the issues of sports and sexuality for many publications, including The New York Time and the Village Voice, among others. Fluent in German, he is a soccer fanatic and an avid cyclist. He wrote this piece in reaction to the allegations over gays on the German World Cup team.

It started like a fairy tale -- a young, handsome team chasing glory with a joyous, dynamic style of play. The team was remarkably diverse, its ethnic background drawn from eight different countries on four continents. Furthermore, its solidarity appeared rooted in its diversity.

“Wir sind ein Team!” was the motto of the Mannschaft, Germany’s national team carrying the hopes of a soccer-crazy country into the World Cup.

This team had become the face of the New Germany, a country that reformed its immigration laws some 10 years ago so that those with different ethnic backgrounds can now successfully attain citizenship.

The buzz in the media was that the team had signaled a shift in attitudes and norms -- it was redefining what Germans looked like, and how Germany as a nation had surely changed.

This might have been too much baggage for any team to shoulder, and still carry themselves through the Cup to reach the final. Yet, after a stumble in their second game against Serbia, Germany vanquished England in soccer's most storied rivalry. Then the Mannschaft destroyed Argentina, who many thought would end up the champion of this World Cup. Young Germany seemed to have the trump cards to play in these matches, and die Jungs could see their way to the final and the championship.

But soccer can be cruel as well, as USA player Landon Donovan said after the USA loss to Ghana. One match can change everything.

For Germany that match was its semifinal loss to Spain, 1-0, when everything that had seemed right went wrong. There would be no championship this time for die Nationalelf.

Suddenly, all those things that were supposed to the special virtues of the team were transformed into its liabilities. Was its style really too “elegant”? Or the youthful exuberance simply inexperience?

On the last day of the Cup, as emotions peaked in anticipation of the final championship between Spain and the Netherlands, Germany had already packed up and gone. Left behind were the fans expecting a huge celebration in Johannesburg with the third-place finishers.

What followed the team home, however, were allegations that there were gay players on the Mannschaft. Published during the last weekend of the Cup, an essay in the news magazine, Der Spiegel, was entitled “New German Men." The gay stuff was not the focus of the essay, but it certainly is what got the most attention.

To understand what happened, it is necessary to back up at least a few months before the World Cup opened. During a tournament final in London, the national team's longtime captain, Michael Ballack, was seriously injured. So serious that Ballack was on crutches and in a cast afterwards – in no shape to play in what would have certainly been his last chance to steer the team to the country’s fourth world championship.

In early May, Ballack’s sports agent, Michael Becker, gave an interview to a writer from Der Spiegel, Germany’s largest news magazine. The writer, Alexander Osang, is very respected in Europe, a social critic, playwright and novelist. Osang expected that Becker, as an agent, would tailor his remarks to promote the interests of his client.

At the time, the agent had a lot to be proud of. His client was being celebrated as one of world soccer’s hunks. Ballack had been chosen by Vanity Fair to be photographed in his underwear, in Germany’s national colors of red, black and gold. This was just before Ballack’s injury occurred. Still, Becker seemed to think that his client was threatened.

By whom? By people envious of Ballack, because they were “mediocre, ugly, untalented, bureaucratic, provincial, unmanly or gay,” he told the writer. Quite a catalog, with the last two words standing out because they don’t really logically follow from the five adjectives that precede them. Unmanly or gay.

Osang was not the only audience for Becker’s rant. As Osang wrote later in his essay in Der Spiegel:

“A few days later . . . Becker told a group of agents and journalists that there was a former player on the national team who was about to go public with the names of ‘the gay combo.’ I expected my fellow journalists to be all ears, but they seemed relatively blasé about Becker's remark. It seemed that every sports journalist was already familiar with the alleged homosexual conspiracy. . . . The rumors accompanied the team to South Africa. They are apparently part of the package.”

The gay stuff was quickly excerpted, translated and reported in news services around the world. In the UK and the US, Becker’s comments about a ‘gay combo’ had conflated. Headlines reported that a sports agent had called the German soccer team “a bunch of gays”. In Brazil, the headlines referred to “um bando de gays” – or a “band of gays”. Apparently the whole team was gay.

Die Süddeutsche Zeitung reported last week that "experts assume that about 10 percent of the professional soccer players in the Bundesliga are gay."

There was no official response from the team, the coaches or the German Soccer Federation, which has the largest membership of any sports organization in the world. The team flying home did not meet with any of the fans who came to greet them at 6 in the morning at Frankfurt airport. Players, coaches and other sports officials all left through a back entrance, getting in limousines with tinted windows or zipping off to make connecting flights as they quietly made their way to their homes.

Across the country, hundreds of thousands of fans voted their anger in online polls, 75 percent saying the team should have come out and celebrated. "Aren't we worthy of you?" the fans pleaded.

The team management released a letter later on in the day, “Das Team Sagt Sorry” – but the apology rang hollow.

Had Germany been successful getting past Spain and winning the final championship, would the allegations of gay players and a ‘gay combo’ have had the same effect? Would they even have been published?

Impossible to say. The Mannschaft may have turned out to be more diverse than most reckoned with. Is there a limit to the diversity for a championship team? Also, how much diversity can most fans handle?

Even before the publication of Osang’s essay, there were cracks in the fan base across Germany as many struggled with their new “Multi-Kulti team.” In blogs and online forums, many fans posted their displeasure with the non-traditional players.

Öczan Mutlu, a Turkish-German member of the Bundestag, wrote a short essay for the online edition of the German newspaper, Die Welt. “Young and dynamic, our multicultural team will lead us to success.” Mutlu continued, recalling that during the 2006 World Cup in Berlin, Turkish-Germans were among the first to decorate their cars with the German flag and the national colors. Mutlu was later interviewed by National Public Radio and his comments broadcast across the US on July 7, hours before the Germany-Spain matchup.

It was a short and inspiring piece. Yet, nearly every comment that readers left on the newspaper’s web page was negative. One responded that Mutlu and his Turks should take their German flag and put it where the sun doesn’t shine.

There is a clear lesson in this. Scratch away at homophobia and almost certainly you will find racism underneath. Hatred goes by many names. A story broadcast by last March by Deutsche Welle noted that the federal republic has become a society that has accepted gay people in politics, in entertainment, in almost all walks of life.

But not in soccer. There are some encouraging signs. Earlier this year, the Mittelrhein football club in North Rhine-Westphalia, Germany’s largest state, mounted a program entitled “One in 11 is gay” – the 11 referring to the number of players on a soccer team. Gay players and referees were invited.

I, for one, am impatient for the day when a team’s public persona is one of diversity, and that diversity is ethnic, is social, is sexual and also is “affectional”. That day when being gay is not something that is used to demean a player or a team’s style. The day when, if a sports agent says there gay players on the team, the team’s response is “so what”?

It’s time to change the rules. After all, we’ve got lots more games to play.

Gary Reese can be reached via e-mail: garynreese@yahoo.com