Share All sharing options for: New dad Cristiano Ronaldo by the pool 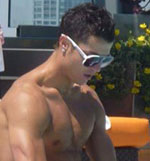 Less than a month after a surrogate bore his child and two weeks after his team was bounced from the World Cup, Portuguese soccer star Cristinao Ronaldo was in New York City to shop and hang out by the pool.

Ronaldo shopped at Gucci, Armani and Prada on a trip that was more productive than his World Cup outing, where he was a total bust. The website INF Daily also has a dozen shots of Ronaldo by the pool, and another site has shots of Ronaldo lounging with painted toenails.

Ronaldo announced the birth of his child, named Cristiano Jr., last month, conceived in San Diego last year with a surrogate. Reports says his mom and sister will help raise the child and that the surrogate was paid $20 million. Based on this INF Daily photo, Ronaldo is still in rocking shape: 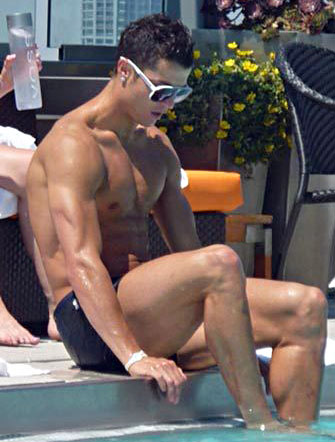