Focus on the Family buys ads on Broncos games

Share All sharing options for: Focus on the Family buys ads on Broncos games 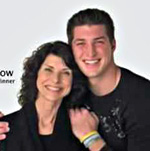 The Tim Tebow Effect continues in Denver, as the anti-gay group Focus on the Family has bought TV ad time on more than a dozen Denver Broncos games this season. Tebow, drafted by the Broncos, was in a Super Bowl ad this year bought by the political advocacy group.

"We saw from our Super Bowl advertising experience that, for a family-help organization like ours, football is a perfect place to advertise," Focus vice president Gary Schneeberger told the Denver Post. "The Broncos are a real family tradition here on the Front Range."

The Broncos' signing of Tebow, the son of Christian missionaries and openly evangelical himself, has electrified many Broncos fans and even won the team some converts.

"When he was drafted by the Broncos, we were thrilled," Schneeberger said. "We had a great experience working with him and his family on the Super Bowl ad. We know what he stands for. We like the guy."

Tebow will not be appearing in the ads, though the group did not detail the specific content of the ads. Schneeberger said they "will make statements on social values and touch on the sanctity of life, but it would be a leap to say the ads will address family issues from a controversial standpoint."

Focus on the Family, based in Colorado Springs, has a history of actively opposing gay rights. On Monday, the group warned that an anti-bullying bill in Congress could lead to the promotion of homosexuality in schools