Share All sharing options for: Team fights homophobia in soccer 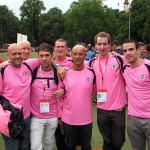 It's hard to miss the Justin Fashnau All-Stars on the soccer pitch. The team is clad in distinctive pink shirts, a color picked deliberately to highlight the team's fight against homophobia in soccer.

The team is named after English soccer player Justin Fashnau, who came out as gay in 1990. He faced a huge backlash after, and committed suicide in 1998 after allegations of sexual assault. The Justin Fashnau All-Stars were formed, player Simon Bennett said, to remind the soccer world of the homophobia that is still prevalent.

The team was started last year and plays only in tournaments. Anyone, regardless of sexual orientation, is invited to play and the Gay Games squad has players from several countries, Bennett said. They are always looking for players and anyone interested should check out their comprehensive website.