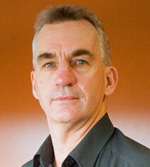 Peter Roebuck, 55, a former Australian cricket player turned a well-known commentator on the sport, leaped 70 feet to his death last week after police came to his South African hotel room to quiz him about an alleged sexual assault on a 26-year-old man. Police are now questioning 16 young men who stayed at his South African home. Reports the Daily Mail:

The alleged victim, Ital Gondo laid a charge of indecent assault against the former Somerset captain after claiming he had been 'groomed' through Facebook.

Officers will now talk to 16 young men - aged 18 to 26 - whose education was being paid for by the sportsman and who lived at his eight-bedroom house in Pietermaritzburg, in the province of KwaZulu-Natal.

The men are mostly Zimbabwean and many came from a home for abandoned boys in the country's capital of Harare.

In 2001, Roebuck received a suspended sentence after beating three teens across their bare butts with a cane. The teens said, "The problem was not so much that he caned us but wanted to examine the marks."

Roebuck, who never married, killed himself after police came to his hotel room and said they wanted to question him. Gondo alleged the commentator asked him to take his shirt off and then pinned him to the bed and assaulted him. Police are combing Roebuck's bedroom to find DNA evidence to support Gondo's claim. The accounts suggested that Roebuck befriended the young men and called them his "sons" and they called him "dad."

At least one of Roebucks young men at his house has allegedly blamed Gondo for the commentator's death by going to the police. Gondo replied: “And as far as I am concerned he took his own life because he didn’t want to face the law. He didn’t want to face up to what he did. So it’s not my problem. He is the architect of his own demise.”