Share All sharing options for: San Diego Chargers kicker Nick Novak takes a pee on the sidelines during game 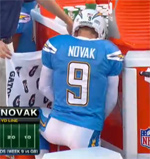 When you gotta go, you gotta go. We've all been there, when you just have the urge. But none of us urinate live during an NFL game on national TV. But San Diego Chargers kicker Nick Novak couldn't wait to use the restroom, not with the game tied late against Denver.

So, with a teammate blocking the view of the fans but not the camera, he relieved himself. A bit later, he missed a 53-yard field goal that would have won the game in overtime (Denver won on a late field goal). Maybe his foot was still a bit wet. Video: