Billy Bean on meeting one of his heroes, gay serviceman Eric Alva

Share All sharing options for: Billy Bean on meeting one of his heroes, gay serviceman Eric Alva 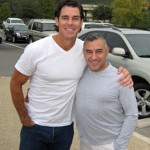 Over the past decade, I have watched with bated breath as our community fought to repeal the “Don’t Ask Don’t Tell” policy that would finally allow the members of our armed forces who happen to be gay or lesbian to be honest about who they are as they fight courageously for our freedom.

One of the most important people in that fight is an amazing man and former Marine named Eric Alva. He was the first purple heart recipient in the Iraq war. He was in charge of 11 Marines in a combat supply unit, when on March 21, 2003, he stepped on a land mine. He ultimately lost his right leg, and sustained significant damage to his right arm as well.

I remember seeing him speak in front of Congress and feeling a mixture of emotions. I felt sorry for him, but at the same time I was inspired by his courage and his admission that he felt “lucky” to be alive. Perspective is a powerful ally. It would be so easy for him to think otherwise and be angry at his misfortune, but he seemed so generous, and strong on TV that day. My inner voice wondered what my perspective would be if life had handed me the same challenge, and I wasn’t proud of my answer.

A few months ago, I received a wonderful note from Eric on Facebook. He wrote of hoping to meet one day. I responded with an admission that I had been thinking about that for a long time as well. I thanked him for all the work he had done to make the repeal of DADT a reality and I promised to stay in touch.

I had made up my mind that I was going to return to my hometown of Los Angeles and finally pursue some of my creative goals that I’d been pretending weren’t important to me. One night, I was talking to my dad about it, and he offered to fly out and then ride along with me on the long drive from Miami Beach to L.A.

I wouldn’t recommend this for everyone, but as my dad nears his 70th birthday, I thought it would be a great chance for us talk and make up for all the years I’ve been gone. The moment we set the date for our trip, I thought about the hardest part of driving across country, the long trek through Texas, and Eric popped into my head. My dad is a former Marine as well and the chance for him to meet Eric, a former Marine and decorated war hero who was also gay, was something I knew I had to make happen. 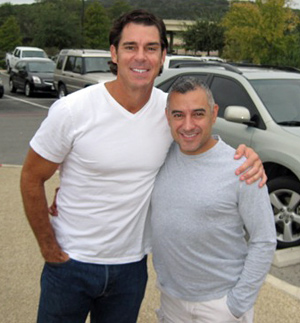 I am the oldest son in a family of five boys. My dad was raised in a strict Catholic home in the Midwest, enlisted at 17, and was in law enforcement for more than 30 years after that. I’ve struggled mightily over the past decade trying to find ways to bridge the gap between my life and his. I know many of us are masters at “not asking and not telling” about our personal lives, myself included, but I wanted my dad to meet a real war hero who just happens to be gay.

On the third day of our drive across this great big country, we rolled into San Antonio. Eric was waiting for us at a table in a cozy little breakfast place and as we walked up to the table I reached out and we hugged like we’ve known each other forever. I clumsily turned around and introduced him to my dad. I was chatty like always and I asked Eric a bunch of questions. It was fascinating to hear him recount his experience in Iraq, and see my dad listening to his every word. I thoroughly enjoyed watching the two of them sharing the brotherhood that only Marines can explain. They spoke the same military language, about rank, platoons, job descriptions and tradition. It was all Greek to me.

My dad is a news junkie, and practically stands up and salutes the American flag whenever it comes across the television. To say he is proud to be an American is the understatement of the century. We have talked about gays in the military many times, but quietly I’ve wondered how he really felt about it, even though he’s always been supportive of me. He looks up to our military and I just knew that if he was able to meet someone from my world and also “his” it would open another window of understanding between the two of us. 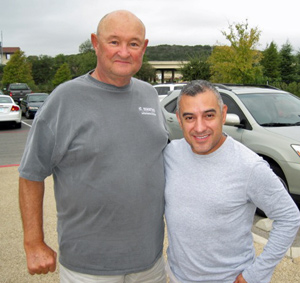 I know when I first told my parents I was gay, they were afraid of the things they did not know and uncomfortable about the stereotypes that they had been exposed to during their lives. I’ve spent the past 10 years or so trying to dispel those unfair stereotypes and show them that I am the same son they knew all along, only that I finally stopped lying to them about my sexuality. We both have learned so much about each other along the way. I’ve been very lucky because they’ve been confronted with a lot and always stood behind me.

We spent the next hour or so together with Eric, and the conversation was amazing. I could see my dad enjoying the experience even more than I had hoped. Eric had a profound effect upon both of us and I felt a strong connection with him. He and I both made a living in a world that forced us to keep our private lives a secret. Ironically, I believe we both identified ourselves more with our work than our sexuality and for me that is not a bad thing.

I think there are many of us who have dedicated our lives to our profession and often being gay in those environments has made our lives more difficult than it should be. That is changing, but only because of people like Eric, who is a hero in so many ways.

After our breakfast had ended, I was feeling great, knowing my dad and I would have plenty to talk about it in the car. I felt very proud to be the son of a military man, and even prouder of my new friend, a soldier, who is gay just like me. For the first time in my life, I wanted to stand and salute a man as he walked away towards his car, so I did.

Billy Bean played Major League Baseball and came out after retiring in 1999.