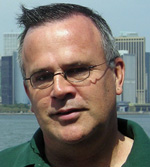 Sports, 1998: Michael Muska remembers how he was less than thrilled by being inadvertently outed by the Chronicle of Higher Education. As he wrote in 2000:

A Chronicle reporter had been talking to a former Oberlin College employee and had been told: "Oberlin is so liberal, they just hired a gay male athletic director."

Unaware of what had happened, I was caught by surprise when, days later, the phone started ringing with friends in academe calling to tell me they had just read on The Chronicle's Web site that I was believed to be the first openly gay athletics director in the United States. "Way to go," they cheered. The quiet way that I had hoped to arrive on the Oberlin campus was pretty much laid to rest, and any desire to just get to work, do a good job, and gain respect regardless of my sexual orientation was by then a moot point. What was relevant in my biography was not that I had coached 20 Division I all-Americans over my career, or that I had twice been named coach of the year in the Southeastern Conference and once in the Big Ten Conference. What mattered was that I was gay.

Oberlin was a small school, but Muska's unique status gave him a large voice, which included being featured in ESPN's landmark 1998 "The World of the Gay Athlete." In a chat session on ESPN.com, he was asked what most needed to be done to help gay athletes. His answers are still relevant 13 years later:

Making sure that all our students feel safe, and the group that probably feels least safe now is the gay male athlete.

And the real desire that some others out there will be brave and willing enough to come out so that the gay, young student-athletes out there today will have other role models to look up to.