LeCharles Bentley, Cyd Zeigler get into it as ESPN's 'Outside the Lines' talks gays in sports

Share All sharing options for: LeCharles Bentley, Cyd Zeigler get into it as ESPN's 'Outside the Lines' talks gays in sports

Outsports generated some heat on ESPN's 'Outside the Lines' on Friday when former NFL center LeCharles Bentley and I got into it. Bentley said I'm "one of the pariahs within the gay community" because Michael Irvin appeared without his shirt on on the cover of Out magazine. When the host asked me to respond, I mentioned that Bentley would probably see it that way, given last year he called New York Jets wide receiver Braylon Edwards gay. Bentley denied the claim, though various sources on the internet discuss it and you can see Bentley's Tweet in question after the jump (if not a penis, I wonder what on earth Bentley was claiming Edwards puts in his mouth). The exchange caught the attention of Dan Fogarty at Sportsgrid, who backed up my claim.

After the show, Bentley and I Tweeted back and forth and we're hoping to find more time to talk about these issues. Bentley says he's a friend and wants to do what he can to help the cause. That's great to hear. And I thank him for mixing it up with me on 'Outside the Lines.'

Also joining the show after we duked it out were Rick Welts, Esera Tuaolo and Will Sheridan. The DC gay football league commissioner Brandon Waggoner was on after us to talk about straight players in gay sports.

Interestingly, there are already 74 comments on the YouTube video - most of which are anti-gay. 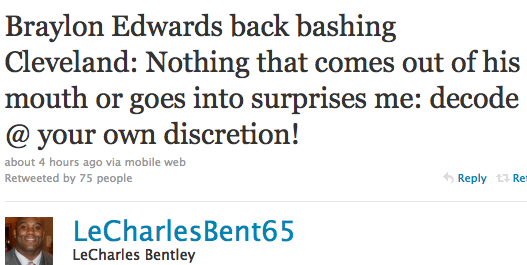