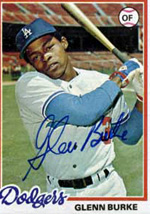 Baseball, 1993: By the time former Major League Baseball player Glenn Burke came out publicly in interviews with Sport magazine and the "Today" show, the gay community in San Francisco had long known he was gay. Burke was a fixture in the city's gay scene in the 1980s and even played in the San Francisco gay softball league.

Burke was a very popular player with the Los Angeles Dodgers in the 1970s and later was traded to the Oakland A's. Dodger players were furious when Burke was traded and it is widely believed that the team knew about Burke being gay and sent him away. I wrote this last year when reviewing a documentary about Burke:

What’s remarkable about Burke is how out he was in the 1970s. Not in a “Hey world, I’m gay” way, but in the sense that his teammates knew as did the management of the Los Angeles Dodgers, Burke’s first team, and eventually fans who would taunt him from the outfield bleachers in Oakland by calling him a “fag.” A memorable moment in “Out” occurs when it is recalled that the Dodgers – trying to stifle rumors that a popular player was gay -- offered Burke $75,000 to get married. His reply: “I guess you mean to a woman?”

Burke was a proud and defiant man, who did not hide who he was. He told the New York Times in 1994 that "prejudice drove me out of baseball sooner than I should have. But I wasn't changing."

Burke is also thought to have been the inventor of the "high five," though a recent ESPN The Magazine article said evidence of one inventor is murky. Burke died of AIDS in 1995 yet his legacy lives on as the first Major League Baseball player to publicly declare he is gay.