All of a sudden, Red Sox and Rays give us a race to watch in September

Share All sharing options for: All of a sudden, Red Sox and Rays give us a race to watch in September 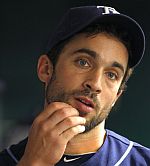 Just a couple weeks ago, baseball's talking heads were repeating the same line: "What a boring September. All the races are over." I guess the Tampa Bay Rays never got that memo. When they woke up on Sept. 3 they were 9.5 games behind the Boston Red Sox for the AL wild card position; They're now 3.5 games behind and play those same Red Sox the next three games after beating them, 9-2, last night.

Interestingly, the New York Yankees play these two teams each of the final 10 games of the season: Seven against the Rays and three against the Sox. They currently have a four-game lead on Detroit for homefield advantage. If that lead holds, they could have "nothing" to play for in their final three games against the Rays...and wouldn't the Yankees fans love their team to knock out the Red Sox by "throwing" those final three games.... The Angels are also lurking out there, five games behind Boston.

Either way, gay fans will likely have something to cheer about as the Red Sox and Rays have both produced 'It Gets Better' videos. The Angels have not...yet.