Share All sharing options for: NFL Week 2: The Bills win a thriller; King of the Hardwood Eric Decker scores again 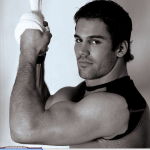 King of the Hardwood Eric Decker had two more TDs

How I saw Week 2 of the NFL. The Bills win a wild one; the Dream Team loses; King of the Hardwood shines, plus hot player of the week and quick hits:

It's way too early to make any declarative statements about the league. It's obvious teams like the Patriots, Jets and Packers will be good, while the Chiefs (outscored 89-10 in two games) and Dolphins will be bad. Beyond that, who knows?

It was fun watching the Bills rally from 21-3 down to beat the Raiders, 38-35, in what was the best game I saw Sunday. It was like it was 20 years ago when both these teams were among the NFL's elite. The Bills scored the winning touchdown with 14 seconds to play on fourth down, then had to survive a wild last play.

On the Raiders' last gasp, Jason Campbell heaved the ball 60 yards into the end zone and for a split second it looked as if Raider rookie receiver Denarius Moore had the ball. But Bills DB Da'Norris Searcy came up with the ball for the interception.

As the fans were filing out and CBS left its coverage, referee Mike Carey decided to look at the play and upheld the original call on the field and took 10 minutes to review it. It's odd that it took so long to look at a play and would have been odder still had the call been reversed and the Raiders given the win while they were showering.

Big game next week with the 2-0 Pats at the 2-0 Bills, but history says we already know the outcome – the Patriots have beaten the Bills 15 straight times and 19 out of 21. We know who is whose bitch.

Blacked out: Fans in Los Angeles got to see the Bills-Raiders game, but missed the final dramatic 27 seconds when CBS cut away to … commercials. For some dumb reason, Los Angeles – 90 miles away – is considered part of the San Diego TV market by the NFL. This means that every second of a Chargers game has to be shown, even if it means yanking viewers from a game they've been watching for three-plus hours. In this case, CBS cut away to local commercials when they could have stayed with the Bills-Raiders as long as possible (or done a split screen). Fortunately, I have the Sunday Ticket package and was able to see the whole game.

Cam for real?: Cam Newton threw for 422 yards in Week 1, but we figured it might be a lucky start against the Cardinals. Then he throws for 432 against the defending champion Packers and he looks like the real deal. He did throw three picks and the Panthers lost again, but he will only get better and the NFL has an emerging superstar on its hands. 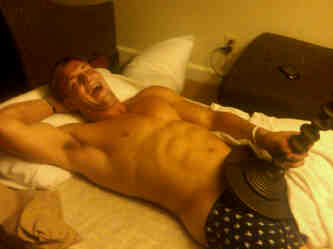 Hot player of the week: Patriots tight end Rob Gronkowski has that rugged jock look. He also tweeted the picture above to a woman this summer, so we know he has a rocking body. And he scored two touchdowns Sunday in the Patriots' 35-21 win over the Chargers.

Double trouble: Gronkowski and Aaron Hernandez give the Patriots a tandem at tight end who run more like wideouts. It opens up the middle of the field for Tom Brady and makes their passing game go since the Pats don't have any deep threats at wide receiver. Unless teams figure out how to stop the tight ends, they won't figure out how to stop New England.

San Diego could have beaten the Patriots, though, if they had not committed three turnovers inside the Pats' 35 and turned the ball over on downs at the New England 1. The Patriots defense has not played well in two games, but thrived on the other team making mistakes or bad play calls. But having Brady throw for 939 yards covers up a lot of defensive mistakes.

Eagles grounded: The Dream Team won't go unbeaten. The Eagles lost a weird game to the Falcons, 35-31, one in which they dominated early, fell behind, took charge again by 10 points, then collapsed in the final 11 minutes, giving up two 80-yard drives for TDs. Oh, and Michael Vick suffered a concussion. Vick's inability to stay healthy for a whole season is one reason I did not pick Philly to make the Super Bowl. Backup Mike Kafka played well and threw a perfect pass to Jeremy Maclin on fourth down in the final two minutes, but Maclin dropped it and the Falcons survived.

The Outsports charm: Our readers picked Broncos receiver Eric Decker as King of the Hardwood, naming him the world's hottest jock. And Decker was cool enough to Tweet his thanks. In 2010, he had one touchdown all season. Already in two games, he has three and is emerging as a terrific slot receiver.

Quick hits: Rex Grossman is 2-0 for the Redskins. The Lions are 2-0. The Bills are 2-0. Go figure. … The Ravens looked like a team resting our its laurels after being beaten by the Titans, 26-13. The Ravens blew out the Steelers in Week 1 and all week heard about how they have slain a demon and were a different team. Sunday they looked inept, turning the ball over three times and being shredded by Titans QB Matt Hasselbeck for 358 yards. The Steelers, meanwhile, basically had a bye, shutting out Seattle, 24-0. …

The Colts' 0-2 start is their first since Peyton Manning's rookie season 13 years ago. Colts fans are seeing how the rest of the league has felt when Indy was making the playoffs nine straight years. … Big collapse by the Vikings, who blew a 17-0 halftime lead and lost to the Bucs in the final 30 seconds, 24-20. The Vikings blew a 10-point lead last week. … Gutsy performance by Tony Romo, who rallied the Cowboys over the 49ers in overtime despite injured ribs. Romo went from goat to hero in a week; such is life in the NFL. … The week before the opener, the Jaguars cut QB David Garrard and started Luke McGown, who has been awful. How bad? He threw four interceptions against the Jets and had a passer rating of 1.8. Look for rookie Blaine Gabbert to start from now on.