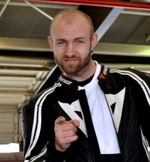 The guys at Queers4Gears have a lengthy interview with out professional motorcycle racer Luke "Lucky" Huff. He talks with them about his longtime partner, his management company (promoting motorcycle racers), and being openly gay in the sport. As we've heard over and over again from athletes in many sports, motorcycle racing simply isn't as overtly homophobic as you might think:

Being openly gay in racing sounds like a difficult marriage of personalities, but it’s not really. One’s sexual preference rarely comes up at the race track other than an occasional cat call or comment about women in general. Since almost every race series also has women racers that regularly beat many of the guys out there, the comments are quickly dissipated when someone makes a remark about that same girl passing them and knowing how to race a bike better.

And as we've said for years, when an athlete comes out, despite homophobic comments he may have heard in the past, his coming out changes the dynamic of the team or locker room or sport:

It’s very rare I’ve ever heard anyone act or speak with a homophobic tone at the track. Even then, the person who made the comment in poor taste would usually apologize later when word gets around to them that I or someone else in the paddock is in fact gay.

Read the full interview at Queers4Gears.