Share All sharing options for: NFL Playoffs: Say bye-bye to the Packers, Saints, Texans and Tebows/Broncos 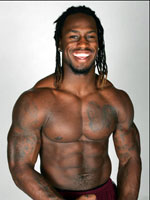 How I saw the divisional round of the NFL playoffs.

In the upcoming championship games, the home Patriots are favored by 7 ½ over the Ravens and the home 49ers by 3 over the Giants, but I see both games as essentially toss-ups. Both road teams match up very well, so any outcome next week would not surprise me. My early read:

In the AFC, New England clearly looked better in winning this weekend than did Baltimore, but it is always dangerous to make predictions based on earlier playoff games; if that was always predictive, the Saints would still be playing since they looked unstoppable a week ago. The Ravens have a terrific defense and blew out the Pats in playoffs in Foxboro two year ago, so they will not fear traveling there.

In addition, the Ravens will be able to move the ball against the Pats, minimizing the time Tom Brady is on the field. Brady has proven to be shaky against a good pass rush and the Ravens have the ability to bring it. I am very tempted to pick the Ravens, but I can't see a QB with a Fu Manchu in the Super Bowl. Patriots 24, Ravens 20.

In the NFC, the surprise 49ers host the surprise Giants, when the public was expecting a Saints-Packers matchup. Flip a coin on the winner here and it will come down to which team makes fewer mistakes (a cliché, but nonetheless true). I am not betting against Eli Manning in a big game. Giants 23, 49ers 20.

Flameout: Green Bay really stunk it up in its 37-20 loss to the Giants. All credit to the Giants for a terrific defensive game plan that frustrated Aaron Rodgers, but the Pack did themselves in. They had eight dropped passes and twice Rodgers missed huge throws that would have changed the complexion of the game. Add in three fumbles lost (a fourth one was missed by the refs), shoddy tackling and a stunning defensive collapse at the end of the first half and you had a total team effort.

Michael Philbin, the son of Packers offensive coordinator Joe Philbin drowned last week and I wonder how much that affected the team, since they looked out of sync from the start. It's hard to comprehend such a tragedy and coming so close to the game had to have an impact. I remember how poorly the 2005 Colts played in their playoff loss to the Steelers, in the first meaningful game since coach Tony Dungy's son killed himself. These tragedies put the game into perspective, but it's hard not to wonder how much they matter once kickoff comes.

One and done: This marks the sixth time in seven years (2009 being the exception) that one of the two top seeds lost its playoff opener. I think it shows how competitive the league is in the era of free agency, since years ago the top seeds almost always advanced at least one round. It also shows that records can mask how close teams are – the Packers were 15-1 and the Giants 9-7, yet in their regular season meeting the Packers needed to rally to win 38-35.

Phil Simms Homoerotic Quote of the Weekend: This used to be a regular feature when I watched a lot of regular season Sunday games in their entirety, but that only happens with the Colts so I don't hear Simms as much and I am often flipping from game to game on Directv. But my friend Matthew caught this in Saturday's Patriots-Broncos game from Simms: “Penetration, that's what hurts.”

Amateurish: If the Texans had anyone other than a rookie playing QB, they would have beaten the Ravens. But T.J. Yates was awful, throwing three interceptions despite his defense playing magnificently. I couldn't stop screaming at the TV when the Ravens were on offense for their pathetic play calling, which had the mediocre Joe Flacco constantly throwing instead of riding Ray Rice, their best offensive player.

I could go on and on, but this one sequence was typical: Up 17-13 with three minutes left, the Ravens had second-and-5 at the Houston 26. The Texans had already used one timeout and two more runs would have made them use them all and could have gotten the Ravens a clinching first down. But the Ravens had Flacco throw two passes, none of them anywhere near on target and settle for a field goal. What's worse is that the incompletions burned only eight seconds and allowed Houston to keep its two remaining timeouts. Yates threw an interception on the final drive, but it was the piss-poor Ravens play calling that gave the Texans even a chance to tie the score.

Done with Tebow: I vow not to write anything about Tim Tebow until next season unless he says something about gay issues. Suffice it to say, he stunk in Denver's 45-10 blowout loss at New England, but the Broncos are stuck with him as their starter since he just “wins” and the fans will demand he get a chance to lead the team a full season. While it's possible he could improve in the offseason, I think not. He is not a passer (only twice has he completed more than 50% of his passes) and no NFL team will consistently win with the option, which is what he is suited for. Denver won't be making any playoff run in 2012. 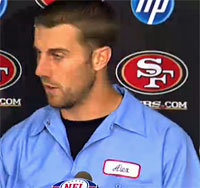 Thriller: The 49ers' 36-32 win over the Saints was one of the greatest playoff games ever, especially the wild final four minutes that saw four touchdowns and four lead changes. I was really happy for 49ers QB Alex Smith, a total hottie who I hear is an incredibly nice person. He was awesome down the stretch and he was so cute wearing his name tag on his shirt in the postgame press conference. Before the season, coach Jim Harbaugh had given all players a blue-collar shirt with their name tag to symbolize team unity, but it looked more like a bowling shirt.

It's funny to hear the contrasts in the radio calls on the winning TD. The 49ers team is ecstatic and screaming while the Saints announcer sounds like he called a TD in an exhibition game: 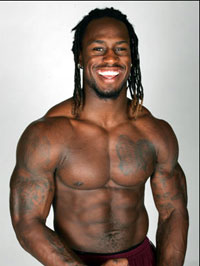 Hot player of the week: Vernon Davis, the 49ers tight end who caught the winning TD pass against the Saints, has an amazing body. Search “Vernon Davis workout” and you can find several article and more photos. Unlike some jocks who eat crap and still are lean, Davis follows a strict diet:

"Usually, I’ll have egg whites, turkey sausage, fruit, and oatmeal for breakfast. For lunch I’ll have some grilled chicken or a turkey burger with veggies, fruit and wheat bread. Between lunch and dinner it’s often a protein bar, and then my evening meal is pretty much the same as lunch."

It was cool seeing him cry after catching the game-winner, since it shows he's not only hot, he's not afraid to show his vulnerable side.