Share All sharing options for: Read the PG version of the Chris Kluwe pro-gay marriage letter 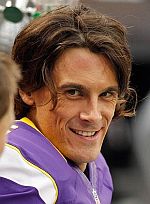 On Sept. 7, Minnesota Vikings punter wrote an epic takedown of an anti-gay marriage politician, bringing "Cockmonster" into the lexicon (2.1 million page views). Days later, he wrote a revised piece for his blog on TwinCities.com that did not get as much attention but is equally fantastic. Kluwe has allowed us to reprint it here.

First off, let me say thank you to all the people that commented on my letter to Emmett C. Burns Jr. You all give me great hope for the human race; that one day we can rise up past the petty differences that divide us and realize we’re all in this together. Perhaps our children won’t look back on our stewardship with regret.

Secondly, I heard from quite a few sources (including my dad) that the letter would have been more powerful and delivered the message better without the swearing. That those who would refute the point could seize upon my colorful insults to dismiss the main thrust as little more than childish antics and egotistical displays of temper.

The swearing is there for a reason. What Emmett C. Burns Jr. wrote, what I responded to, was far more disgusting and foul minded than any simple scatological reference or genital mashup. His words degrade the very essence of the English language with their barely hidden venom and intolerant hate; drag it screaming into the muck of iniquity by wrapping a mantle of seeming reasonableness around corruption and control; masquerade as discourse while screaming their very lie to any Heaven you care to name – I could go on.

My words? My words are a litmus test for those that would see the truth of a message rather than the package it’s delivered in. I won’t lie, it’s also because I personally find them entertaining to write and read (as do a large amount of other people), but those who would argue that my message means nothing simply because I’m referencing a portion of the male anatomy would never have accepted it anyway. They would have used other excuses, excuses like “Oh he’s just a punter”, or “What do you know, you just play football”, or “No one cares what you think you fag”.

No, my words are meant for those that might be on the fence, those that are initially drawn in due to shock, or laughter, or outrage, but then look at what lies beneath, the truth of the matter. Them I might reach, might offer a quick lightbulb flicker of “Ohhh, so that’s what’s wrong with that argument”. But those who don’t look, who don’t question, who happily treat the symptoms and not the disease – isn’t that the very problem with our politics today? No one is interested in what lies hidden in plain sight beneath what’s said; the glossy dung ball of intolerance and hate buffed to a lustrous gleam by rhetoric and catchphrases.

So here is my gift to you. The exact same letter, but without the oh so naughty words that only mean what we allow them to mean. What will your excuse be this time?

I find it inconceivable that you are an elected official of the United States government. Your vitriolic hatred and bigotry make me ashamed and disgusted to think that you are in any way responsible for shaping policy at any level. The views you espouse neglect to consider several fundamental key points, which I will outline in great detail (you may want to hire an intern to help you with the longer words):

1. As I suspect you have not read the Constitution, I would like to remind you that the very first, the VERY FIRST Amendment in this founding document deals with the freedom of speech, particularly the abridgment of said freedom. By using your position as an elected official (when referring to your constituents so as to implicitly threaten the Ravens organization) to state that the Ravens should “inhibit such expressions from your employees”, more specifically Brendon Ayanbadejo, not only are you clearly violating the First Amendment, you also come across as a BEAUTIFULLY UNIQUE SPARKLEPONY. What on earth would possess you to be so mind-bogglingly stupid? It baffles me that a man such as yourself, a man who relies on that same First Amendment to pursue your own religious studies without fear of persecution from the state, could somehow justify stifling another person’s right to speech. To call that hypocritical would be to do a disservice to the word. SAD PUPPY DOG EYES hypocritical starts to approach it a little bit.

2. “Many of your fans are opposed to such a view and feel it has no place in a sport that is strictly for pride, entertainment, and excitement.” DISAPPOINTED LEMUR FACE WITH SOLITARY TEAR TRICKLING DOWN TO CHIN. Did you seriously just say that, as someone who’s “deeply involved in government task forces on the legacy of slavery in Maryland”? Have you not heard of Kenny Washington? Jackie Robinson? As recently as 1962 the NFL still had segregation, which was only done away with by brave athletes and coaches daring to speak their mind and do the right thing, and you’re going to say that political views have “no place in a sport”? I can’t even begin to fathom the cognitive dissonance that must be coursing through your rapidly addled mind right now; the mental gymnastics your brain has to tortuously contort itself through to make such a preposterous statement are surely worthy of an Olympic gold medal (the Russian judge gives you a ten for “beautiful oppressionism”).

3. This is more a personal quibble of mine, but why do you hate freedom? Why do you hate the fact that other people want a chance to live their lives and be happy, even though they may believe in something different than you, or act different than you? How does gay marriage, in any way shape or form, affect your life? If gay marriage becomes legal, are you worried that all of a sudden you’ll start thinking about DANCING CHUBTOAD? “ALACK AND ALAS MY TOP HAT HAS FALLEN. Gay marriage just passed. Gotta get me some of that DELICIOUS STATE FAIR HOTDOG!” Will all of your friends suddenly turn gay and refuse to come to your Sunday Ticket grill-outs? (unlikely, gay people enjoy watching football too)
I can assure you that gay people getting married will have zero affect on your life. They won’t come into your house and steal your children. They won’t magically turn you into a lustful FROLICKING OSTRICH. They won’t even overthrow the government in an orgy of hedonistic debauchery because all of a sudden they have the same legal rights as the other 90% of our population, rights like Social Security benefits, child care tax credits, Family and Medical Leave to take care of loved ones, and COBRA healthcare for spouses and children. You know what having these rights will make gays? Full fledged American citizens just like everyone else, with the freedom to pursue happiness and all that entails. Do the civil rights struggles of the past 200 years mean absolutely nothing to you?

In closing, I would like to say that I hope this letter, in some small way, causes you to reflect upon the magnitude of the colossal foot in mouth SLIDE WHISTLE TO E FLAT you so brazenly unleashed on a man whose only crime was speaking out for something he believed in. Best of luck in the next election; I’m fairly certain you might need it.

p.s. I’ve also been vocal as hell about the issue of gay marriage so you can take your “I know of no other NFL player who has done what Mr. Ayanbadejo is doing” and shove it in your close-minded, totally lacking in empathy piehole and choke on it. UNFORTUNATELY PHALLIC HEDGE SCULPTURE.