Share All sharing options for: Hockey player Riley Sheahan arrested for being 'super drunk,' was dressed as Tinky Winky 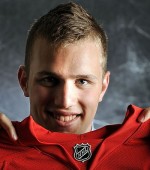 Riley Sheahan is a top prospect in the Detroit Red Wings organization and he spent two days before Halloween getting "super drunk," according to police. He used a teammate's ID to get into bars and was dressed as Tinky Winky (yeah, the "gay" Teletubby). He had a blood alcohol level of .30, four times the legal limit, Michigan Live reports.

Sheahan, 20, who plays for the Grand Rapids Griffins, was wearing the costume of a purple Teletubby, also known as Tinky Winky, when he was pulled over by police on Oct. 29.

He also was charged with providing false information. He was carrying the Michigan driver’s license of Brendan Smith when he was pulled over by police on Ottawa Avenue NW in downtown Grand Rapids.

Police first thought they had arrested Smith, but Sheahan admitted he used his teammate's ID to get into bars.

Sheahan, who pleaded not guilty at an arraignment hearing in Grand Rapids District Court on Nov. 6, has his next hearing scheduled for Dec. 13. He was charged under the state's new "super drunk" distinction of driving with a blood-alcohol content of .17 or higher. The charge could carry up to 180 days in jail with a conviction and possible deportation because he is not a U.S. citizen.

Alas, there is no photographic evidence of Sheahan dressed as Tinky Winky. I bet he looked adorable.