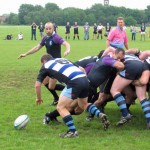 Sydney Convicts in action at the Bingham Cup

The Sydney Convicts are bringing the Bingham Cup rugby trophy back to Australia. The Convicts completed a sweep of the tournament this weekend in Manchester, England, winning the A division, 22-5, over the San Francisco Fog and the B division, 13-3, over the Dallas Diablos.

"A great day of finals rugby at Bingham cup. Great to see the spirit. Sure the party is gonna be a wild one!!!" tweeted Gareth Thomas, the pro rugby player who came out two years ago. Thomas attended the event along with Ben Cohen, a former elite rugby player and gay ally.

Here is a writeup of the event courtesy of the Convicts:

In an almost perfect execution of their Bingham Cup campaign, the Sydney Convicts won both the Bingham Cup and Bingham Bowl on Sunday in Manchester. The Convicts A team played a tough match against our long-time friends but also rivals the San Francisco Fog in the Grand Final to win the Bingham Cup 22-5. The Convicts B team won their grand final match against the Dallas Diablos 13-3. Convicts player James Saunders was also named player of the tournament by Manchester 2012.

The Convicts are proud of their achievements at the Bingham Cup but also proud of the entire gay rugby community. This was the largest Bingham Cup ever the largest rugby tournament in the world in 2012. The quality of play and organisation of the tournament improves at each Bingham Cup. The host club, Manchester Village Spartans, did a fantastic job and all teams played with pride and passion in true Bingham Cup spirit.

Convicts President David Whittaker said, “The tournament was a lot of fun but also grueling. The standard improves every time, so it's gets harder to win the trophies. We think we had the best two teams that we’ve taken to a Bingham tournament but until you get there you don't know how much everyone else has improved. Our preparation was top notch but it's always tougher than you think it's going to be. We all have very sore bodies.”

It was a hard fought victory for both Convicts teams, which included quite a few injuries in the bitterly cold and wet conditions. The boys played with courage and great Convicts spirit. For many of the players, this was their first international tournament. The entire team pulled together, veterans and new players, on and off the field. There was also an incredible group of supporters including coaches, team managers, doctors, physios, trainers, medics and partners who came to help organize, motivate and repair both teams. The Cup and The Bowl could not have been won without them.

“The highlight of any trip is making it to a grand final," said Whittaker. "The pressure and intensity of those encounters is something very special and it's a privilege to be involved. There are also some awesome moments when a player who is relatively new to the game - we took 22 Bingham Cup virgins this year - does something unexpected and brilliant.”

“This could be a screaming run, a big tackle or a dive on the ball putting body on the line. These are the wonderful moments of Bingham. The lows are more about whether your body can get you through the three days. It's tough, it hurts and it's exhausting. But we pull together and have amazing support from medical and support staff. ...

“Bingham Cup 2010 Champions New York were beaten in the semi-final by the Fog. The Fog are always a solid team and they played a hard and relentless game of rugby. The Convicts had to leave everything out there. When you win a Bingham trophy you know you've earned it. The Fog have been at the very top of the competition from the beginning and today they insisted we be our best in order to win. We take our hats off to them. The Diablos are always competitive and they made us really work for the Bingham Bowl. ...

“We would also like congratulate all the other trophy winners and to thank the Manchester Village Spartans, the City of Manchester, IGRAB, RFU, and the Bingham teams for a brilliant week and a fantastic tournament.”