Share All sharing options for: GQ does photo shoots with Cam Newton and a shirtless Tim Tebow 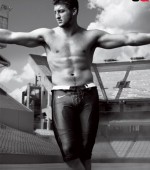 GQ Magazine knows what sells and it's Tim Tebow. How else to explain the magazine doing two September covers as part of its NFL kickoff -- one with Cam Newton of the Carolina Panthers, the other with Tim Tebow of the New York Jets.

The Newton story, complete with 11 photos of Newton looking terrific in various fashions, is in-depth, since the writer had one-on-one access with the quarterback. In contrast, the writer on the Tebow piece did not get any personal time with him and wrote a hasty piece from the vantage point of a nervous Jets fan. And there are only three photos, two of them of Tebow shirtless. Newton, a 6-5, 245-pound physical wonder, is fully clothed in all his.

The most talked-about Tebow photo, the one of him posing Christlike, was actually taken when he was at the University of Florida and altered by GQ. It's obvious that GQ wanted to sell magazines and figured a Tebow cover, even with scant photos and a small article, would do the trick. Newton is by far the better quarterback and an emerging superstar, but Tebow is by far the better copy. It will be a fun season watching the Jets soap opera.