Share All sharing options for: Ex-college soccer player tells about his life in the closet as a gay athlete 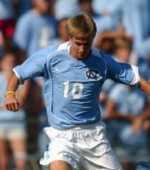 Stephen Bickford was a highly recruited prep soccer player who attended the University of North Carolina in the middle of the last decade, but never realized his potential. He chalks this up to the incredible emotional strain of living as a closeted gay athlete.

Bickford, 26 on Aug. 26, tells his story in a well-written first-person account on gay4soccer. It is a tale of lament for what might have been, and after reading it I wonder why he simply never took the plunge and came out to someone on his team. It couldn't have been much worse than suffering from major depression, eventually transferring and seeing his soccer dreams end.

What would my coach think? Would he not play me because I’m gay? Would I be cut from the team? These thoughts were almost unbearable. It’s a weight on an athlete’s shoulders that nobody should have to experience, but it happens every day to thousands of closeted athletes playing team sports all over the world. Through it all, in my mind it came down to this: If I wanted to be able to realize my dream of being a professional soccer player, I was going to have to hide a part of who I am as a person. I believed that living in pain for years and years was necessary in order to be able to do the one thing I loved more than anything else in life.

His story is an example of the psychic toll the closet takes on people. How might things have gone differently for him had he been able to confide in a teammate he was close with? The energy he used to keep his secret (including dating another closeted athlete) eventually proved too much. He was never his authentic self to his teammates because he kept that hidden from them.

We have published dozens of positive coming out stories by athletes. But Bickford reminds us that the closet is still large in the sports world and shows no sign of emptying out any time soon.