Share All sharing options for: An 18-year-old rugby player from Wales does fantastic coming out video 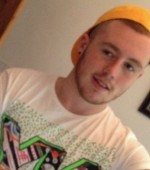 "I hated myself, I hated myself for what I was," Thomas "Bozzy" Boswell says at the beginning of his wonderfully moving 12-minute YouTube video (see below) detailing his experience as a closeted gay teenager and his triumphant coming out story. As the captain of his rugby team in Quaker Yards, Wales, Boswell was trying to reconcile being a macho jock with being gay and finally decided to tell the world who is he.

Boswell, 18, decided seven months ago that he could no longer hide being gay, so he wrote a letter to his mom (or "mum" in his delightful Welsh accent) and left it for her as he went off to play in a semifinal rugby match. Despite his thoughts being on his mother's reaction, Boswell played well though his team lost. When he got to the locker room, he turned on his phone and saw this text from his mom:

" 'Tom, I'm so proud of you and I love you.' It was such a relief that my mum acted the way she acted. ... She's the most amazing person in the world."

After consulting with his mom, they decided to not tell anyone else until Tom went off to college in September. But that plan was nixed when he took a holiday with 12 male friends and heard that rumors were going around that he was bisexual.

"I felt it was a blessing in disguise," he says. "I didn't wanted to lie and I didn't want everybody to think I'm bisexual because I'm not."

With his heart pounding, he told Luke one of his teammates. His reaction? "This guy is a big guy and he plays rugby and he openly cried on the phone and that set me off crying," Tom says. The rest of his team was told and they all accepted it, as did his father and rest of his family. Deciding that he didn't want to have to tell people one by one, he took the 2012 option and posted this on Facebook earlier in August:

"To clear all the gossip up and shit that has been going around about me. Yes I am gay and I never choose this and it's the hardest thing Iv ever had to deal with in my life. It's the hardest thing to come to terms with when you don't want it but you can never get rid of the feeling . I know it may come as a very big shock to people. I had planned to slowly tell people but as rumours have come out I had to tell my family and the thoughts and feeling you have are the hardest and most guilty and disappointed feelings I have ever had.

So if you have any questions or a problem please mail me or delete me if you don't like it. I am sorry but it is the real me. I would really like to thank my close friends and especially my rugby team as I honestly thought I would be to ashamed to ever carry on playing rugby. But the boys have showed and proved to me that my thought of them were wrong and I'm so grateful they are the best bunch of players and true friends that i could ask for.

I'm am honoured to have the friends I have from school and rugby and truly can't believe how supportive they are. This is the hardest thing I have faced but it has to be faced as rumour do spread. I just felt like this was the easiest was for people to know the truth and not have to explain to everyone separately. If anyone is going through the same thing never ever be afraid to contact me I know how hard it is and I will never ever share what you tell me.

I understand that everyone has different opinions and I will hear and see stuff I won't like but my heart is beating so fast right now but I feel like I owe everyone the truth. Honestly mail me if you have any questions or don't understand I will reply I just hope that most people can understand. Thank you."

His post got 340 "likes" and had 76 comments and Tom was blown away by the support. One player's comment really hit home: "You are one of the best players I've played with and that's all I am going to look at you for and that's what I respect. Your sexuality has fuck-all to do with it. Make sure you keep playing rugby and enjoy life."

The day after his Facebook post, Tom made his YouTube video and in less than two weeks it has more than 8,000 views. The overwhelming reaction to the video has Tom grateful that he can make a difference and welcomes any email at rugbybozz@gmail.com. I think it's great that he can finally be open about who he is and play the sport he loves.

It would have been hard for the Tom Boswell of just seven months ago to think he would have this as a self-description on his Twitter page: "Coolest ginger youll ever know ! ... Gay as fuck as well."