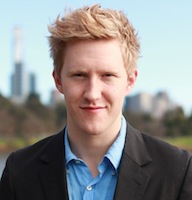 Aussie Rules football player Jason Ball has come out of the closet publicly. He's using the opportunity to launch a change.org campaign to encourage the AFL to show an anti-homophobia ad at their Grand Final, which is the AFL's equivalent of the Super Bowl. The game is at the end of September.

Ball's story reflects ones we've heard over and over. He saw and heard some homophobia when he was in the closet and teammates (foolishly) assumed there weren't any gay guys in the locker room. So he assumed the worst would happen. Instead, he's been met with a positive reaction.

''It was the one place I never thought I'd be able to come out. Ever. It just felt like a really hostile environment. I worried I'd be bullied, maybe I'd get kicked out of the side, maybe the opposition would treat me differently or I'd get abuse [from supporters] over the fence,'' he told The Sunday Age. ''I didn't know any footballers who were gay, so I could only assume the worst, and it scared me.''

And, as we've also heard over and over, when he came out and his teammates realized some of their homophobic language was hurtful to a teammate, they didn't attack Ball for it...they changed their actions.

For Ball, publicly coming out was unnecessary. His teammates figured it out and were supportive. The homophobic language stopped. ''It was like they could see those words have an effect on people because it was hurting me, one of their mates.''

It's beyond my understanding at this point why pro athletes assume the worst will happen when they come out, but there is not a shred of evidence that the majority of athletes would face any negative backlash whatsoever (except for the occasional person who "has a problem with it").

Ball is an avowed atheist who studied at the University of Melbourne.

Former AFL player Jason Akermanis, who has said some not-so-pleasant things in the past, asked "Who cares?" upon hearing of Ball's coming out and his new campaign. Man, that guy can't help but come across as a jerk.