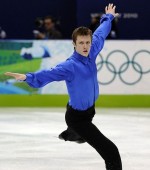 Lets just start off by saying the U.S. Figure Skating Assn. must be gasping for air in this pre-Olympic year. Let's have a look at whom you will not be seeing at the U.S. Nationals this weekend in Omaha, Neb.

This years men’s event is looking quite thin in terms of medal hopefuls at the world and Olympic level.

Three-time U.S. Champion Jeremy Abbott and is the favorite to win a fourth crown. His short program set to a spy theme is probably the best work he’s put out there. However, his long program is not winning me over. Set to the ballad “Bring Him Home” from Les Miserable, it's missing that certain edge that you need to draw in the crowd for 4 minutes, 40 seconds. Especially when mistakes become plenty as we’ve seen in his Grande Prix tour this year. Abbott has failed to produce for the U.S. on the international level, leaving many to wonder if this talented skater will ever reach his potential. When he is on, he is on fire; with that being said, he has not skated a clean long program since the 2010 U.S. Championships.

The only other skater to medal for the U.S. and land a quadruple this year in competition is two-time U.S bronze medalist Ross Miner. One thing about Miner is he extremely consistent, especially when it comes to his technical elements. He lacks the artistry that that elite level has, and without it, it kind of leaves you in the middle. If Miner wants to be back the U.S. world team, he’s going to need to work on his speed, position in his spins and hope from mistakes with others to put him in the position to battle it out with Abbott.

Richard Dornbush seems to be back on the comeback trail after a disastrous season last year. After being the surprise silver medalist at the 2011 U.S. Championships, he seemed to lack the confidence last year that brought him to onto the national podium. Although he hasn’t medaled on this year Grande Prix circuit, I find it’s simply a lack of concentration, especially if he’s land his quadruple toe loop. Dornbush has come back this year looking like a completely different skater. His artistry, spins, and jumps have all been improved with newfound speed, and if can put it all together for two clean programs. I pick Dornbush to win the National title.

One skater to keep your eye out for is Joshua Farris. At the last two national championships, disaster has really hit him. After his impressive competitive season, winning the silver medal at the Junior Grand Prix Final, I think his confidence from that will either help him in Omaha or fail him.

Two other skaters have outside shots at making the podium this year. Adam Rippon and Jason Brown both ooze talent and have a wealth of competitive experience. But without consistent triple axels, which is an absolute requirement, they will have to either skate their absolute best or hope for others to make mistakes.

Chad Conley is a former elite Canadian skater, who writes about the sport for Outsports. You can read his coming-out story here.