The LGBT community in Los Angeles came out in force Tuesday night for a special reception for openly gay Olympic speed skater Blake Skjellerup, hosted in part by Outsports (we've listed the other amazing hosts below).

It was quite an evening at the gorgeous home of Brian Pendleton and Chad Goldman. The event was meant to show Skjellerup -- in Los Angeles on the way home from the first two legs of the Speed Skating World Cup -- the support that's behind him as he aims for the Olympic Games. We also aimed to raise his profile in the media; With reports from CNN, ABC, Fox Sports and others, we did that I think.

Skjellerup and his manager, Jonathan Chubb, also unveiled a new pin designed to support Blake and the LGBT community. In 2012, the London Olympics had a "pride" pin; No chance of that in Russia. So Skjellerup's team is filling that void with this pin: 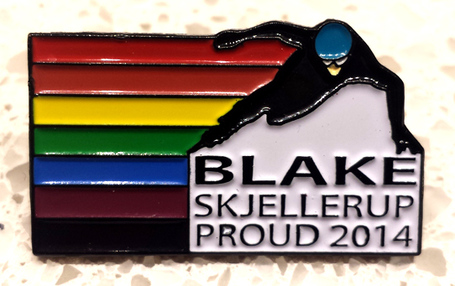 A bunch of great people came together to make the event happen: Brian Pendleton & Chad Goldman, who offered their home as a venue; Jason Duguay and Fred Arens, who provided immeasurable support; Scott Schmidt, who helped organize and provided various resources; Stephen Macias, who made sure the media and other key folks paid attention; David Cooley, Allan Hoffenblum, Brad Torgan & Matt Szabo, who sponsored the event; And my amazing partner, Dan Pinar, who always supports me in everything I do.

Skjellerup is now in the middle of his Olympic qualifying run. By early November, he'll know if he's qualified. You can help him get all of the resources he needs to compete at the highest level by contributing to his Indiegogo campaign! 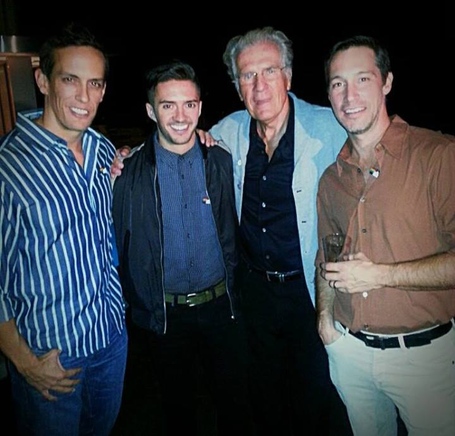