When then-teenager Brittany McMillan first encouraged people to wear purple in support of LGBT youth and victims of bullying, I doubt she ever imagined we would see virtually every top pro sports league join the tidal wave of purple.

This year, GLAAD has garnered the Spirit Day participation of the NFL, NHL, NBA, MLB, WNBA, MLS and other sports-oriented companies like the WWE and UFC. Be on the lookout for lots of purple -- and supportive tweets and messages -- form them on this year's Spirit Day, Oct. 17. Outsports is a proud partner in Spirit Day!

When I first saw the date of Spirit Day, I wondered how the NFL might handle it on their Thursday night football broadcast this week. That night, the Seattle Seahawks visit the Arizona Cardinals in primetime. The NFL has gone out of its way to infuse the color pink into its culture, in support of breast cancer awareness month. Surely they could do something in support of LGBT youth and bullying victims this Thursday.

It would certainly be powerful to have the NFL Network commentators all wearing purple ties that night. I know it's too late in the game to coordinate purple apparel -- like gloves and towels -- for the teams, but having purple on the NFL Network set would send an amazing message.

If only they had scheduled this year's all-purple Vikings-Ravens game to be tonight (it's Dec. 8). That would have been the greatest statement of all! 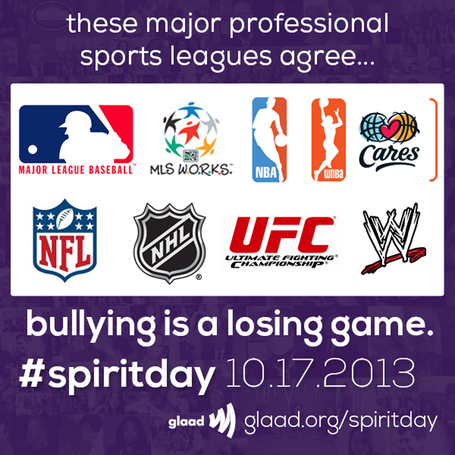 These major professional sports leagues and entertainment organizations are all going purple on Thursday, October 17th for Spirit Day, for the second year in a row, as a show of support for LGBT youth everywhere in a united stand against bullying. Expect to see them spreading the word about stopping anti-LGBT bullying via social media, including Facebook and twitter.

Pro-sports leagues aren't the only ones who are pro-LGBT youth. Individual athletes Kye Allums, Jason Collins, Brittney Griner, and WWE Superstar Darren Young are among this year's Spirit Day ambassadors.

These athletic ambassadors are trailblazers in sports arena and in the LGBT community. Jason, who recently tweeted about Spirit Day, came out as the first openly gay active male professional athlete in an article for Sports Illustrated this year. Kye, advocate and mentor, is the first openly trans college athlete in the history of NCAA Division I. Brittney has a list of accomplishments in her basketball career that's about as long as she is tall. Dedicated to raising awareness about the LGBT community, she is the first openly gay athlete to sign with Nike. WWE superstar Darren was the first in his league to come out as gay. They are joined by tons more celebrities going purple like Macklemore, Ryan Lewis, Ke$ha, Melissa Etheridge, andthe cast of Hot in Cleveland including Betty White, just to name a few.

Athlete Ally and the You Can Play Project, groups dedicated to ending LGBT-phobia in sports, are among this year's many Spirit Day partner organizations. Companies like The Coco-Cola Company and Johnson & Johnson, media outlets, landmarks, schools, and faith groups are also going purple to support LGBT youth. American Apparel even launched a Spirit Day store.

"By coming together to support LGBT youth, American sports leagues are sending a clear message to fans everywhere: homophobia has no place in the game," said GLAAD spokesperson Wilson Cruz. "Whether on the field, in the locker room, or cheering from the stands – it's clear that LGBT people are essential to the sports community."

"The You Can Play Project proudly recognizes Spirit Day as a time for everyone to stand in solidarity with LGBT youth to fight against bullying and other forms of discrimination and to celebrate their courage and strength," said Wade Davis, Executive Director of the You Can Play Project and an openly gay, former NFL player.

Founded in 2010, Spirit Day is an international, united stand against bullying and show of support for LGBT teens and young adults everywhere. Participants can get into the spirit by:

Time is running out to go purple on Spirit Day as a participant and partner, and to join the Facebook event! Sign up today and spread the word.