How I see the NFL after each team has played 12 games, three-quarters of the schedule. Plus, my hot player of the week is well known to Outsports fans.:

As I have done after my first-quarter and first-half of the season writeups, I will stick with my preseason Super Bowl matchup: Denver vs. Seattle. There are no dominant teams in the league, but home field will be key and the Broncos (10-2) and Seahawks (11-1) have the inside track right now. Even if Seattle loses Monday night to the Saints, I think Seattle will wind up at home for the playoffs. Update: Seattle crushed the Saints, 34-7. No one will beat them at home in the playoffs the way they play there.

The week began and ended with two controversies that will involve league action. On Thanksgiving, Steelers coach Mike Tomlin stepped on the field during a kickoff return by the Baltimore Ravens. Sunday night, the Redskins got screwed by botched officiating that denied them a key first down against the Giants; it was one of the biggest officiating blunders I can recall. Tomlin should expect a six-figure fine and the NFL needs to suspend the Redskins-Giants ref crew for a game.

A look at the playoff picture with four games left. A caveat: if any contending team loses its starting quarterback to injury, consider that team toast.

AFC
Denver (10-2), New England (9-3), Cincinnati (8-4) and Indianapolis (8-4) should win their respective divisions. Denver will be heavy favorites in its last four games – home to Tennessee and San Diego and at Houston and Oakland – and is the favorite to capture home field. One worrying note is Peyton Manning in very cold weather (he underperforms his averages) and next Sunday in Denver has a forecast high of 19.

I still think the Broncos are the most complete team in the AFC, though injuries at key positions (defensive line and secondary) are taking their toll. Yet every AFC contender has had big injuries, so the last month becomes a war of attrition. In Denver's two losses, they committed eight turnovers and still barely lost, so ball handling is the key to their success or another playoff flameout. Manning has pretty much wrapped up league MVP and the question will be whether he can break Tom Brady's season record for TD passes. Manning is 11 away from the record and I sense he will fall short, especially if the Broncos' playoff seeding is locked in. They need a healthy Manning for the playoffs more than he needs another record.

If the Patriots catch the Broncos for home field advantage, they will be a slight favorite in the AFC. The Pats are 6-0 at home but only 3-3 on the road. They almost lost to woeful Houston (2-10) on Sunday and also struggled on the road before beating Atlanta (3-9) and Buffalo (4-8), a couple of crappy teams. However, the Patriots have played nine games decided by a touchdown or less and are 6-3, so they can handle pressure. This team has the league's best coach and a resourceful QB, so a Broncos-Patriots rematch in the AFC title game looks like the most likely AFC outcome right now.

The Colts have all but clinched the AFC South, but they have regressed since beating the Seahawks, 49ers and Broncos. Their offensive line stinks, Trent Richardson has been a bust since they traded for him and Andrew Luck looks lost without Reggie Wayne. The defense has been shredded twice in the past four games, and Indy is lucky they play in the league's worst division or else they would be a playoff bubble team.

The Bengals should win the North, but if the Ravens (6-6) can pull to within a game of them by Week 17, their season finale against each other will decide the division since Baltimore won their first game. I like Cincinnati's defense (even missing key lineman Geno Atkins) but still don't think QB Andy Dalton is who I want behind center in a playoff game.

Kansas City (9-3) has come back to Earth, losing three in a row, now that they've played Peyton Manning (twice) and Phillip Rivers instead of Case Keenum, Ryan Fitzpatrick, Terrell Pryor, Jason Campbell and Jeff Tuel. Here is how far the once-mighty Chiefs defense has fallen. In their first nine games, they allowed 109 points. In the their last three, they've allowed 103. Having won only two games in 2012, the Chiefs making the playoffs will still be a huge accomplishment, but this team looks like a one-and-done wild card team.

Fun fact, should Kansas City meet Cincinnati in the wild card round. Since one of them has to win the game, it would be either's first playoff win since defeating the Houston Oilers (the Bengals in 1990 with Boomer Esiason the Chiefs since 1993 with Joe Montana). This shows you the suckitude of both franchises in the past 20 years that the last team each beat in the playoffs doesn't exist any more.

Even though six teams are fighting for the final playoff spot, it will realistically come down to Miami (6-6) or Baltimore (6-6). Both have to play New England at home, but the Dolphins draw Buffalo, Pittsburgh and the Jets, all with losing records. Baltimore, meanwhile, gets a bad Vikings team (3-8-1) but has to travel to Detroit and Cincinnati. I like the Dolphins to sneak in to the final spot, barring some 5-7 team winning out and edging them on tiebreakers.

Pencil in the Seahawks into one playoff bye slot, and the winner of the NFC South in the second. The Saints (9-3) have two huge games coming up against Carolina (9-3), winners of eight in a row. Hard to believe that this is the same that lost to Buffalo but Cam Newton is playing very well at QB and the defense is the NFL's stingiest.

As for Seattle, they can lose at San Francisco (8-4) next week and still lead the division and I don't see them blowing the lead. They have tended to play down to the level of the opponent but have a killer defense and a QB in Russell Wilson who makes enough big plays.

The Lions would have to royally screw up to lose the North, but don't put anything past a team that commits turnovers in bunches and lost to the Buccaneers. That said, just winning their final two against the Giants and Vikings should be enough. The Bears are too inconsistent and banged up to catch the Lions, and the Packers need back a healthy Aaron Rodgers, a four-game win streak and a lot of help to win out. The Lions are on the verge of their first division title since 1993, back when Rodney Peete was the starting QB.

The NFC East is setting up perfectly for Dallas to lose in Week 17 on a Sunday night game, as they have the past two seasons. The Cowboys play Chicago, Green Bay and Washington before their season finale against the Eagles, while Philly has Detroit, Minnesota and Chicago. Here's the deal – if Dallas goes into Week 17 one game up, they would have likely clinched the division based on a better division record, so it's imperative they somehow pull ahead of the Eagles. Something about an all-or-nothing Week 17 game on national TV at Jerry Jones' palace screams disastrous Tony Romo fourth-quarter pick to me.

As for the wild cards, the Saints-Panthers runnerup gets one, and the 49ers (8-4) likely get the second. The Cardinals are 7-5, but are 0-3 in the division and would lose all tiebreakers to San Francisco. We could have some fun wild card matches like Panthers-Cowboys and 49ers-Lions.

Hot player of the week: This one is easy – Eric Decker of the Denver Broncos. The reigning Outsports King of the Hardwood winner had a career day with a team-record four touchdown catches in Denver's 35-28 win at Kansas City. I was thrilled I started him on my fantasy football team (44 points!). He's a stud on and off his field and I know a lot of you will appreciate the Decker butt shot at the top of this story. Here's one of Decker after the game: 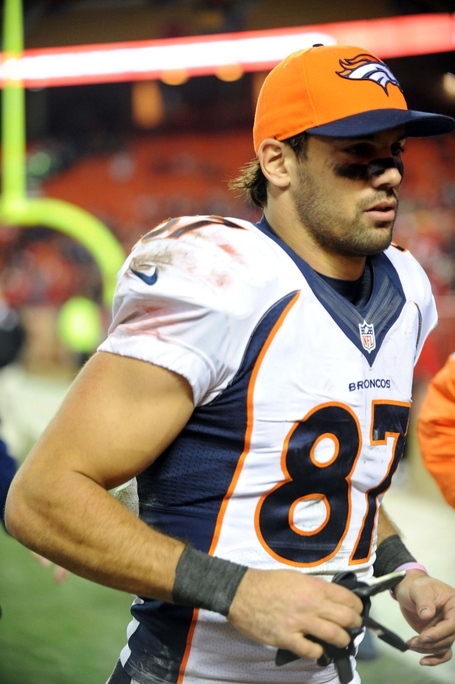