Athletes a big draw at this year's gay pride festivals

Share All sharing options for: Athletes a big draw at this year's gay pride festivals

Another sign that gays and sports are more intertwined than ever comes this month as cities across the country celebrate gay pride. Gay athletes and straight allies are prominent at several of them.

"I knew coming out that I was going to walk with my old college roommate, and getting to throw the first pitch out is sort of icing on the cake," Collins told the Boston Globe. "I saw that Joe had participated in the parade last summer and I was very proud of him. I was also partly jealous."

Here is how the Associated Press described Collins' first pitch:

The 7-foot center was greeted with a nice applause when the PA announcer read the opening of the SI article: "I'm a 34-year-old NBA center. I'm black. And I'm gay." Wearing a Red Sox jersey with the No. 98 on the back, Collins threw out the first pitch to Red Sox manager John Farrell. ...

Also this weekend, straight ally Brendan Ayanbadejo will be honored at Christopher Street West, the gay pride event in West Hollywood. He is being given the George Moscone Ally Award, named after the former San Francisco mayor who was killed along with Harvey Milk. From the award nomination:

"This year's award is being presented to 2012 NFL Super Bowl champion Brendon Ayanbadejo who has repeatedly and steadfastly advocated for LGBT rights. A straight ally, Ayanbadejo has not only spoken out about his staunch support of marriage equality, he has encouraged fellow professional athletes to do the same. In an industry known for discrimination towards LGBT people, both with players and many fans, Ayanbadejo has risked his popularity amongst many by supporting the rights of a few."

On the weekend of June 29-30, Chris Kluwe will be the grand marshal in the Twin Cities pride parade. The longtime Minnesota Vikings punter, now with the Oakland Raiders, will be honored for his fight last year against a constitutional amendment that would have banned gay marriage in Minnesota.

That same weekend, in Chicago, the Cubs will have a float in that's city's pride parade. The grand marshal of the Chicago parade will be former NFL player Wade Davis.

"Since leaving the league, [Davis] has gotten really involved in the LGBT community and has put a lot of energy into his efforts. He is just so involved. It really inspired us," said parade coordinator Richard Pfeiffer. "He was giving so much time and energy to the LGBT community, we thought we'd be honored to have him as grand marshal."

Last weekend, former pro soccer player David Testo was the grand marshal at Salt Lake City's pride parade. Testo was asked how his life has changed since coming out in 2011:

"It's definitely changed for the better," he said. "I think I've been able to affect some people's lives in a positive way, and I think the movement is growing now."

Also last weekend, openly gay boxer Orlando Cruz was a busy man at pride events in Queens and Buffalo. He was the grand marshal of the 21st annual Queens Pride Parade and Multicultural Festival.

"I am proud to be who I am — a Puerto Rican and gay," said Cruz, a former Olympian and fourth-ranked featherweight. "I am honored to be grand marshal in the Queens Pride Parade and I hope that the young people watching and marching in the parade are also proud of who they are."

Cruz also found time to attend Buffalo's gay pride event and tweeted out this photo of himself: 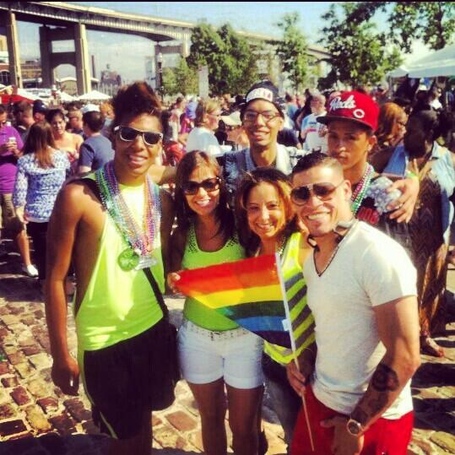