Those wacky Burgess brothers of Australia's National Rugby League are at it again. First, brother George was caught posting nude selfies on Twitter (not that we minded). Now, brother Sam has been suspended for using a "squirrel grip" on an opponent, Will Chambers, during a game. A "squirrel grip" means "grabbing a handful of nuts," and as these two photos from the incident show (click photo for larger view), it's as painful as it sounds: 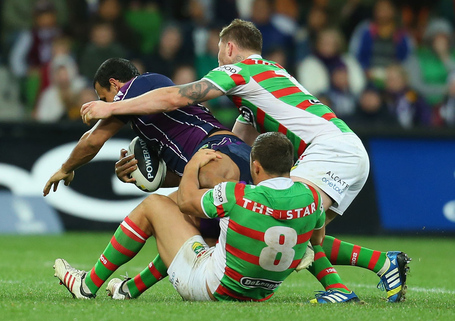 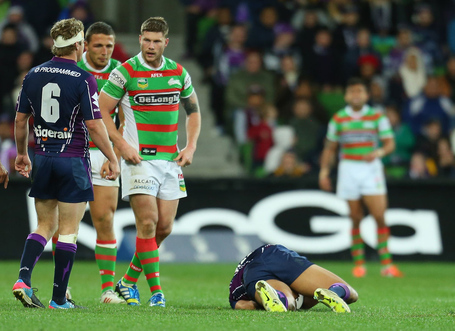 Burgess, who was on the receiving end of a "squirrel grip" in 2007, has apologized and was suspended for two games for the South Sydney Rabbitohs. But teammate Roy Asotasi says Burgess is not a dirty player (or "grubby" in Aussie slang):

"A lot of people out there are saying that Sam's a grub," Asotasi said. "It's not what Sammy is as a person. He goes out and plays hard and sometimes things happen.

"I knew something had happened at the time but didn't really pay attention to it. But then I saw it and thought 'he could be in a bit of trouble here'."

There are two other Burgess brothers in the NRL, Tom and Luke, and we can't wait to see what they come up with.