PuckBuddys' Detrot Red Wings writer Jeff Adams has written a new book about gay hockey players called 'Hat Trick.' Puck Buddys' Doug Johnson caught up with Adams and talked with him about the writing of his first book.

PuckBuddys: You're gay and you're also a hockey player. How often do those two worlds come together, other than in your book?
Jeff Adams:Since I play on a couple teams for the New York City Gay Hockey Association, being a gay hockey player is something I wear on my sleeve most Saturday nights. Both of these worlds come together in my role as a correspondent for Puck Buddys as well because I doubt any straight writer is going to make connections between "Glee" and the performance of the Detroit Red Wings during a season.

PB: Before we get into the book itself, what motivated you to write a novel specifically for a young adult audience?
Adams: There's something about YA (Young Adult) that I find intriguing because you're dealing with characters that don't completely have their world view formed yet, they're hyper aware about fitting in, very wrapped up in labels and perceptions. Even if they come across as confident, the internal dialogue can be full of questions and trying to sort things out. Then you put a group of teens together and you can watch what happens as differences of opinion and perception come into play. I've read a good bit of YA over the past decade and I enjoy seeing how the different scenarios play out. So I decided to see if I could craft a story of my own about a teen coming out and adding the twist that the coming out happens because it's two teammates who are falling in love.

PB: Would you say this is more a hockey book that happens to have gay characters, or more a gay story that happens to feature hockey players?
Adams: I think it's pretty 50/50. There's the romance that Simon and Alex get into, but that runs parallel to their senior year hockey season. Each chapter is a week, and so each chapter has an update on how the team is doing in their quest for the state championship. There are several scenes featuring the guys playing, whether it's in a Falcons' game or with their friends on a frozen pond in their neighborhood, and at practice. Even one of their first dates involves hockey as they go to a Penguins game. All of that is counterbalanced by Simon and Alex simply being two guys in a new relationship. Eventually, there are the conflicts that arise when their relationship becomes public.

PB: OK, introduce us to the lead characters of "Hat Trick."
Adams: The story is told by Simon Roberts, high school senior and a wing on the Central High Falcons first line. Early on, he's trying to convince himself that he cannot have feelings for Alex Miller, his friend and linemate. He's had a crush on Alex since Alex transferred into Central at the start of their junior year. Alex is out to his parents and to a few of his closest friends back in Boston, but hasn't come out to anyone since he arrived at Central. Alex takes the plunge after the opening game of the season, while he and Simon are alone in a hotel room after an away game, to reveal that he's had a crush on Simon, too.

Two of their friends have large supporting roles as well. Jackson Carver is the other wing on the first line and has been Simon's best friend for as long as either of them can remember. He's the first person Simon and Alex tell and he's got their back completely. Leo Morris is the Falcons' team captain and also a good friend to them both who ends up with a small side story of his own, which I won't spoil here.

PB: Without giving too much away, what are the central conflicts the characters face, and how fully are they resolved?
Adams: Once the guys' relationship is revealed there are conflicts within the team. The major problems, however, are at home for Simon. One of the reasons Simon tries to convince himself he's not gay is because he's worried about how it will go over at home, especially with his dad and older brother. He's right to have those concerns.

As I mentioned, the story plays out across the hockey season. By the end of the book, the season is done and the various plot points are wrapped up.

PB: How different is it to write scenes focused on the characters finding love with each other, and those where they're on the ice playing the game, and which was more difficult?
Adams: The scenes that were the most difficult to write were the ones involving the conflicts. There are some difficult situations Simon and his friends are put in, or have to deal with, and it was hard for me to put characters that I like so much through that. I loved writing the romance - having Alex reveal his feelings, going on the dates, learning more about each other. It was enjoyable to create that. My favorite sequence is their Christmas morning. The game scenes were challenging. My hope is that those are written so that whether you know the game well or not at all, that you can easily visualize what's going on in the game sequences.

PB: What do you enjoy about the gay young adult genre, and what sorts of things annoy you, stylistically or otherwise? Care to name any names on either count?
Adams: I enjoy stories that can help teens figure out the world around them. The genre can transport them to places and situations they may not see in their own community, or see represented on TV or the movies. The work of David Levithian is quite extraordinary at doing this. This summer, Alex London pushed the gay YA genre into a new place with "Proxy" as he created a gay teen action hero in dystopian future. Bill Konigsberg, whose books feature athletes, also had a great book this summer with "Openly Straight," which put a spotlight on how labels affect people and the importance of being yourself rather than trying to live up to a label.

Things that annoy me in YA are when the message to the reader is that you should settle, or be less than what you can be, or that a relationship is all that matters even if it's damaging to you. I'd rather read a story that carries the message of finding yourself or overcoming adversity.

PB: A young boy or girl picks up your book and reads it cover to cover. What do you hope they remember and take with them once they put it down?
Adams: Looking at the story as a whole, I hope there are three things that come through. First, when you find your Mister or Miss Right, go for it. Be true to yourself and do what seems right to you. Second, never underestimate the strength and support you can draw from friends. True friends will always be there for you. Third, sexual orientation in no way impacts your ability to participate in sports. If you want to be an athlete, practice your sport and get out there and do it.

Beyond that, maybe the story helps a young man or woman figure themselves, or their friends, out.

PB: I don't know much about the genre, but I imagine there might not be a lot of gay YA novels that feature sports so thoroughly, or written from the perspective of someone who actually plays the game. Are there more "Hat Tricks" to come?
Adams: There are several books that feature athletes as main characters- Bill Konigsberg's  "Out of the Pocket," Martin Wilson's "What They Always Tell Us," Alex Sanchez's Rainbow Trilogy to name a few of my favorites. But I don't know of a gay YA book that features teammates as the romantic leads or that features hockey so heavily. If there's one out there, it's hiding. "Hat Trick" was recently part of a giveaway on a site and a few comments from the people entering were to the effect that they hadn't seen a book like this before.

Are the more "Hat Tricks" to come? Possibly. While this book was in editing, I worked on some drafts of stories that continue to explore these characters, and introduce some new ones. It's too early to tell if these stories will turn out, but the characters are pretty active in my head so I think there'll be more.

PB: On a side note, there's a lot of hockey slang that frankly sounds a little gay. "The five hole", "the wrap around", "odd man rush", "two goal bulge." I could go on but won't. Was it tempting to include any of that, or on the flip-side, was it hard not to include it?
Adams: I don't tend to consider the potential double entendres into these terms and, as a result, Simon doesn't either. He takes the game seriously and, as such, since he's telling the story, he's not considering any meanings other than the regular hockey ones.

PB: How much of "Hat Trick" is actually Jeff Adams' story, and how much is it what a young Jeff Adams wished to read?
Adams: "Hat Trick" is far from autobiographical. Going to middle school and high school during the 80s in Alabama, I certainly wasn't playing hockey, though I was still a fan of the game from growing up in Michigan. I also wasn't considering myself as gay back then, not even with the kind of internal debates Simon has in the book. The character of Mike is the closest to me. Like him, I was a journalist working on the high school newspaper. I didn't cover sports, but during my high school years I covered a lot of stories and took a fair number of pictures too.

Is this what a young me wished to read? As a teen I primarily went back and forth between Stephen King and Star Trek novelizations. While there was YA back then, authors like SE Hinton and Judy Blume, I wasn't reading that. Gay YA, meanwhile, has come into its own over the past 10 to 15 years, so it wasn't available to my young self. I'd like to think if this book landed in young Jeff's hands, however, he would've enjoyed reading it as much as the adult Jeff enjoyed writing it.

You can find 'Hat Trick' on Amazon. 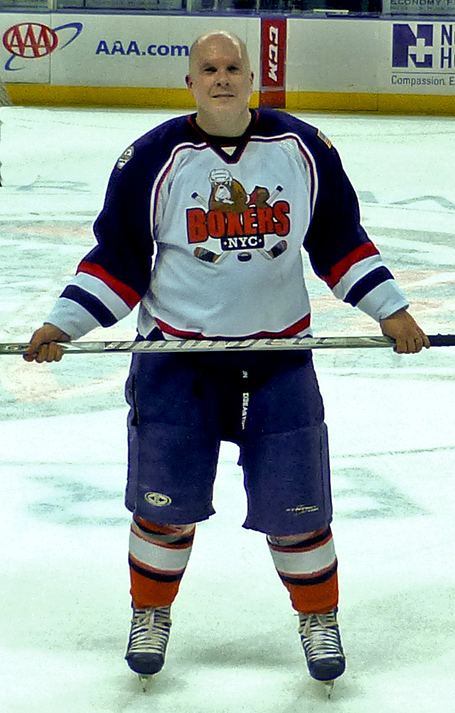