The initiative is criticized by one gay group for playing into stereotypes, but it is drawing attention.

If you are watching the English Premier Soccer League games this weekend and see players wearing colorful laces, there are supporting efforts to fight homophobia in soccer.

Rainbow laces have been sent to all 92 Premier League and Football League clubs, as well as the 42 professional teams in Scotland, by gay rights charity Stonewall.

The target of the Right Behind Gay Footballers campaign is to change attitudes within the national game and make football more gay-friendly. According to research by Stonewall, seven in 10 football fans who have attended a match had heard or witnessed homophobia on the terraces.

Stonewall and the bookmaker Paddy Power (which never passes up a chance to promote itself) sent out 5,000 pairs of laces, one for each player on the teams. The campaign has been spearheaded by Joey Barton, a player with Queens Park Rangers.

"Join the rainbow laces movement. Sexuality in sport should not be an issue in the 21st century. #RBGF," Barton tweeted this week, using a Twitter hashtag that has become popular.

Everton is another EPL team whose players will wear the laces. Everton captain Phil Jagielka said: "For me and the rest of the lads at Everton a player's sexuality is not important, but their ability on the pitch is. We don't tolerate discrimination of any kind at Everton and the whole club works hard to get that message out to the fans. No one should feel that they can't be themselves - on or off the pitch - so that is why we are supporting this initiative." 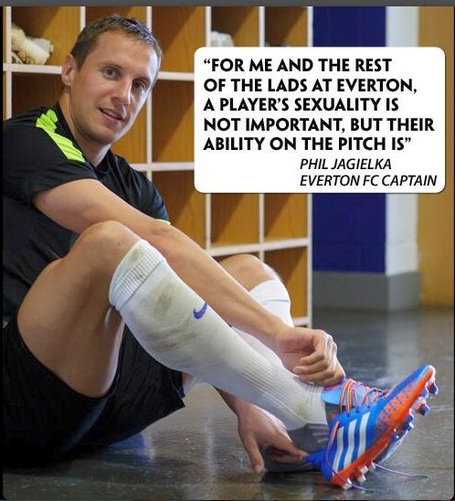 However, Manchester United players (the sport's most popular club) are not wearing the laces and the BBC reports that clubs that will use the rainbow laces are in the minority. League officials said they were unaware of the campaign, so are not promoting it, leaving the decision on whether to wear the laces up to each player. The BBC said that several teams were put off when the laces came in boxes adorned with the Paddy Power logo, seeing it more as a marketing stunt that a serious campaign.

The slogan being used -- "Right Behind Gay Footballers" -- has been criticized by the group Football v Homophobia for playing into stereotypes.  "It is incongruous to run a campaign aiming to change football culture whilst using language which reinforces the very stereotypes and caricatures that, in the long term, ensure that homophobia persists," the group said in a statement.

Stonewall backed its decision to team up with Paddy Power, with a spokesman asserting: "Homophobia in football is a tough nut to crack. Paddy Power has a huge reach, their style is cheeky and authentic to them and can get through to fans and clubs. The message is certainly tongue in cheek but it is going to get people engaged. The attention it's receiving means it's starting debates and that can only be a good thing."

If the goal is to get attention, then it clearly has been a success, even if the tactics and the messenger are open to criticism.