NFL Week 1: Stupid is as stupid does; naked Chiefs butt

Share All sharing options for: NFL Week 1: Stupid is as stupid does; naked Chiefs butt

During the NFL season, I will post thoughts on the week's games when the mood strikes. The mood struck in Week 1.

We are not through the week's first games and we already have three candidates for bonehead play of the year, one that cost a team a game.

Bronze medal (Darius Reynaud, Titans): The Tennessee return man took the opening kickoff at Pittsburgh and started to run the ball out of the end zone. He got about a half-yard out and decided he'd rather take a touchback, so he went back a few yards, kneeled and handed the ball to the ref. One problem -- if a ball carrier advances into the field of play, then goes back to the end zone on his own accord and kneels or is tackled, it's a safety. 2-0 Steelers. That turned out to be the offensive highlight of the Steelers until late in the game, when a garbage-time TD made it 16-9 Titans.

Silver medal (Danny Trevathan, Broncos): The Denver linebacker picked off Baltimore's Joe Flacco in the Thursday opener and raced untouched into the end zone. Only problem was that he dropped the ball at the 1-yard line in a premature celebration and the ball rolled out of the end zone for a touchback. The only mitigating circumstance was that it was 42-17 Broncos at the time.

Gold medal (Lavonte David, Buccaneers): David cost Tampa Bay a win with an astonishingly dumb play. The Bucs led, 17-15, and the Jets had less than 15 seconds to get into field goal range with no timeouts. Jets rookie QB Geno Smith scrambled to 10 yards to the Tampa 45 and was clearly out of bounds when David shoved him hard to the ground. A flag flew -- 15 yards for a late hit -- and the ball was moved to the 30. Nick Folk was able to attempt a 48-yard field goal instead of one from 63 yards out and he nailed it. Jets win, 18-17, and David is the goat of Week 1 and the leading contender for Bonehead Play of the Year.

Butt show: Courtesy of Deadspin via a CBS screengrab, we got to see Chiefs lineman Tyson Jackson get de-panted against the Jaguars:

Perfectly awful: The AFC North went 0-4 this week. The Ravens suffered the worst opening game loss ever for the defending Super Bowl champs. The Steelers lost a home opener for the first time for the first time since 2002 and lost center Maurkice Puncey for the season when a teammate accidentally dove at his knees. The Bengals blew an 11-point second half lead at Chicago; so much for Cincinnati having a dominant defense. The Browns lost at home to the Dolphins. They are now 1-13 when opening Week 1 at home. Two North teams are guaranteed to win in Week 2 (unless there's a tie), since the Bengals play the Steelers and the Browns play the Ravens.

Shaky start: The Patriots were lucky to escape Buffalo with a 23-21 win on a last-second field goal. Tom Brady threw 52 times (which is way too much) and completed just a bit more than 50%, with an interception and a costly fumble at the Buffalo 1. Bills QB E.J. Manuel started his first NFL game and had a rating 30 points higher than Brady.

While Brady connected with Wes Welker replacement Danny Amendola 10 times and holdover Julian Edelman seven times, there was only one catch by a tight end. Rob Gronkowski can't get back soon enough. The Bills lost the game on offense, with their last four drives totally 67 yards and four punts after taking a 21-17 lead.

Great pickup: While I understood most of the off-season moves by the Ravens in letting players go, the decision to basically trade receiver Aquan Boldin for nothing made no sense. He was Joe Flacco's safety blanket and his absence left the Ravens with few experienced wideouts. The 49ers snapped up Boldin and in his first game, he had 13 catches for 204 yards and made an instant connection with Colin Kaepernick. If Flacco was watching, he must have been crying.

Kick him out: I was stunned that the refs did not toss Packers linebacker Clay Matthews for his cheap shot out of bounds on 49ers QB Colin Kaepernick. He launched himself at Kaepernick and came close to clothes-lining him. It was a bush league play and if the league is really serious about player safety, Matthews would have been tossed.

Hot player of the week: Cleveland Browns tight end Jordan Cameron had a nice TD catch against the Dolphins and he looks good to boot: 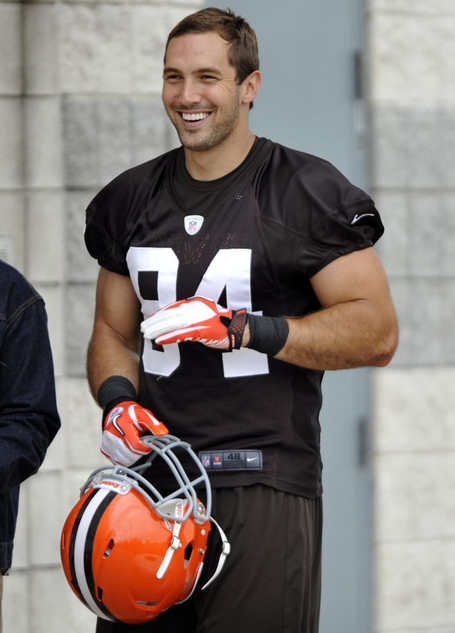