Ryan in Russia: Straight Russian men like to touch and wink

After USA's big hockey win over the Russians, Ryan was told to stay off the streets -- and not go to the Russian gay bar in Sochi.

Unlike a lot of media folks who love to point out #SochiProblems, we have been incredibly fortunate with our hotel situation. It ended up as a benefit to not be a rights-holder for the Olympics, as we were not at the mercy of the IOC's not-quite-finished accommodation allotment.

Our execs and the Russian production team we contracted struck gold and got us a sweet spot right across the street from the Olympic Park, renting out an entire boutique hotel for our crew. It houses our studio and production office. We have our own bathrooms, which are downright LUXURIOUS compared to some of the pictures I've seen. The water is crystal clear (but I'm still not going to drink it ... I'm adventurous, not insane), and the food here has been a solid B-. But really it's our interaction with the staff that has been my favorite part.

Out women rack up Sochi medals

Ireen Wüst wins three medals, tied for most medals at these Winter Games.

Norway biathlete Emil Hegle Svendsen would fit in with NFL players who like to celebrate early by spiking the football at the 1-yard line.

Since we get to see the same folks every day, we've gotten past the initial getting-to-know-you phase and have become coworkers, essentially. Sure, hotel staff are usually friendly, but that's really out of a sense of duty. Spending three weeks here, the locals have really opened up. The women at the front desk are just the right amount of sassy (especially given the frequency with which we've been losing our room keys), showing some personality instead of being customer-service robots. And all the kids working the restaurant and bar are adorable, smiling rays of sunshine, which is more than we needed with the heat wave that hit Sochi last week.

Except for the bar manager. He's something else. His name is, and I'm not joking, Black Valentine. BLACK VALENTINE! And he looks like he just walked off the set of a teenage-vampire-love story, and he's obviously the bad guy. Not hooker-with-a-heart-of-gold who comes around to save the day, either. He wears tight polos and a choker-esque black necklace with a big-ass silver pendant every day, and hasn't smiled once. It's amazing, fascinating ... and a little creepy. I keep my distance.

Also, I called the food-service crew "kids," because holy cow, they all HAVE to be under 20, and weigh maybe 100 pounds soaking wet. I don't like to use labels, because I recoil anytime I get shoe-horned into one, but let's call a spade a spade. We have meals at the Twink Bar and Grille.

Back to the reason for the post. Since we are familiar with the staff, one thing I've noticed is how engaging the men have been, primarily in conversation. And not just friendly banter, but they love to touch when talking to you, or to get your attention. By that I mean a hand on the shoulder, or the upper back, or the arm. Not flirty like a drunk guy hitting on you at the ol' gay bar, but just a welcoming way to show they're paying attention. Maybe it's slight affection as well, just not in a sexual way, but a cultural thing. And I friggin' LOVE IT! Definitely something I will remember and bring back with me.

Oh, and they wink. A lot. It's so cute I can't help but beam from ear to ear. Gets me every time.

I am the same; I love contact and being almost overly friendly, and realize that back home it's not something too common. Must be the American bubble of personal space we live in (though close-talkers still get on my nerves). And that's a shame, because it's a wonderful thing I wish happened more often. Not a thigh caress with that come-hither look in the eyes, but just a calming way to address one another, a primal urge to make a connection we've lost since we figured out we had vocal chords. Hell, even shaking hands is an incredibly frequent occurrence, especially with our security team (and you're damn right I go out of my way to greet the drop-dead-handsome bodyguard every day with a big smile -- square jaw, wears suits, doesn't speak lick of English, it's almost too much to handle).

Well, except Black Valentine. The man hasn't broken character since we got here. It's impressive. If I can get him to crack a smile, I deserve a damn medal. Although I'd prefer silver; gold has never been a good look for me.

And now for a random tangent ...

FYI y'all, the Cold War never ended. Or at least you couldn't tell by the way the town was acting Saturday. That was when the USA played Russia in men's hockey, and the place had the same vibe as Super Bowl Sunday ... or Saturday, as it were. The hotel staff had their faces painted; Boris the hotel owner was running around the lobby with an air horn four hours before the puck dropped. Flags were everywhere. The neighborhood poured into the second-floor sports bar where ample flatscreens were ready to go. There was a palpable buzz around the Park, and even our crew were calling contacts and cashing in favors to score tickets at the last minute. It was an incredible experience to be in the middle of this special kind of madness. For Russia, the Winter Olympics are figure skating, ice hockey, and other.

The only casualty was my plan to find the one gay bar in Sochi, Mayak, last night. I've read about it, and was instantly reminded of college at Wazzu, where we made the 2.5-3 hour round-trip to Spokane (the big city!) to patronize Dempsey's Brass Rail. The similarities were striking: a dark, slightly seedy bar that housed a dance floor in a conservative city where we could be ourselves, with a late night drag show. The memories make me all misty-eyed.

But since the Stars and Bars won in controversial fashion, with the Russians' potential game-winning goal overturned on review by an American referee no less, the locals were none too pleased. Our security team (and God bless ‘em, they care about us dearly, but are a bit suffocating at times) pretty much said it was in our best interests to not roam the streets of Sochi. And having been around some sauced-up, angry fans after big games previously, we got the point and stuck around our hotel, and sent our drivers on a beer run. Never had MGD tasted so good.

A little about me: A native of Seattle, I was born at Swedish Hospital (blocks away from the Capitol Hill gay bars...a little foreshadowing!), graduated with a degree in Journalism and Sport Management from Washington State University (class of '03, Go Cougs!). Moved to LA two weeks after graduation and have lived in and loved my adopted hometown ever since. Landed my first job with FOX Sports in September of 2004 running TV compounds for NFL, MLB, the BCS while we had it, and NASCAR. After another stint with FOXSports.com, I have been with FOX Sports 1 since June of last year. 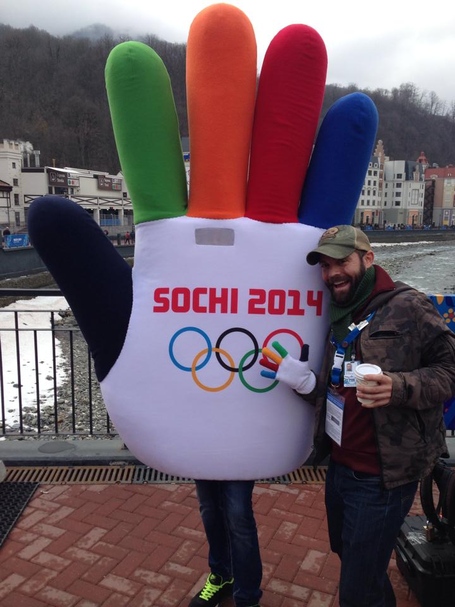 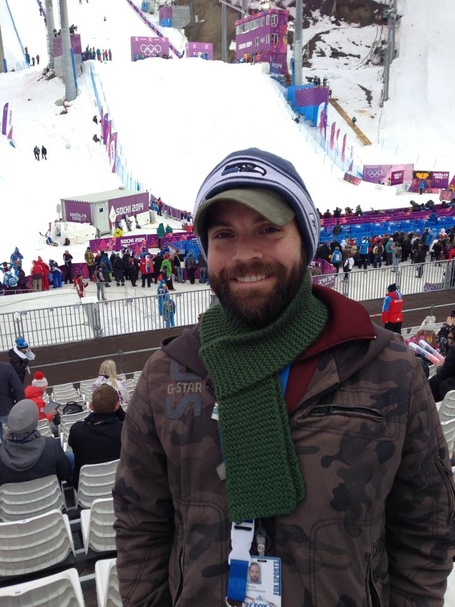