Whitney found complete acceptance from his Walla Walla Community College baseball team when he came out to them just days after his then-boyfriend, Conner Mertens, came out to his college football team.

Chandler Whitney wanted to come out to his Walla Walla Community College baseball team, he just didn't know how or when. Over winter break he had spent time with his boyfriend, Willamette University kicker Conner Mertens, and his friends and felt acceptance by Mertens' hometown friends. It was a relief to be open and honest about his relationship with them.

When he returned to school last month, Whitney was more at ease with his sexuality. He didn't want to hide from his teammates anymore.

"I'd been planning to do it at some point anyway," Whitney told Outsports, "and seeing the reaction to Conner's story calmed me down."

From mama's boy to All-American

LeQuan Chapman grew up in a rough neighborhood where "words like 'faggot' and 'gay' were primary in describing all things bad." He discovered sports and became true to himself and is now out and proud.

Last week when the baseball team gathered for the first practices of the new year, talk turned to stories from winter break. Because he'd spent much of the break with Mertens, Whitney felt the time was now. He stood up in front of the team, said he had contemplated whether to tell them a secret or not, and shared a "confession" he'd been holding back from them since they first met:

The team broke into spontaneous applause. It took Whitney off-guard.

"Being where I am in eastern Washington, it's not the response I expected. I'm in Walla Walla, there's not a lot of open-mindedness on the surface."

In 2012, over 60% of the Walla Walla County voters rejected a ballot measure that ultimately legalized same-sex marriage in the state of Washington; Barack Obama garnered less than 40% of the vote there.

"I didn't necessarily expect hostility, but I expected a guy or two to feel uncomfortable or awkward. Everyone on the team shook my hand, gave me a hug and said we're a family and they had my back. The guys I thought would feel the most uncomfortable said don't worry about a thing, it's not a big deal."

Whitney grew up in a Catholic household in Beaverton, Ore., just a couple miles from Nike world headquarters. He was a standout baseball player, going between first base and outfield.

"I'm a pretty good hitter," Whitney said. "And my defense is fair."

He batted .350 in high school with a .461 on-base percentage. He was first-team all-state in Oregon his senior year, leading the team to the state semifinals. He attended Southridge High School, coincidentally the same name (but not the same school) as Mertens' high school. You can check out Whitney's college recruiting video below. 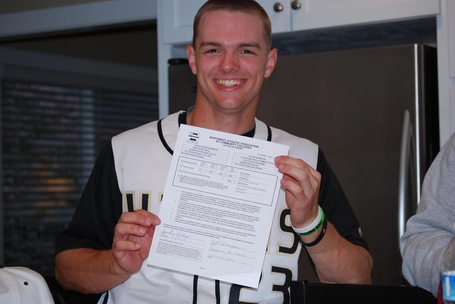 Whitney got pseudo-outed his freshman year in high school. Another student started a rumor that Whitney had sent him revealing pictures. Whitney claims he didn't. The rumors snowballed and he became targeted by many students as "the gay kid" when in fact he was the (deeply closeted) gay kid. As he neared graduation just last year, he revealed only to a couple close friends that the rumors were true, even as he struggled with not wanting to be gay.

"I didn't accept it myself very well," Whitney said. "I didn't want anyone to know, and if anyone asked I would deny it even though I knew I was gay. It took me until I was a senior in high school to see how dumb that was. Now I realize that the most important thing is that I'm happy."

Part of that happiness is his half-year relationship with Mertens. While it wasn't because of his boyfriend's coming out story last week that he decided to take the plunge, he said it's made it easier to explain his relationship.

"You know that college football player at Willamette who came out?" He asked his teammates last week. "I'm dating that guy."

In the few days since he came out to his team, Whitney said he has experienced no change from his teammates. Nobody shies away from him in or out of the locker room. It's business as usual.

"Nobody's weird about it. They still make the same jokes they did before, minus some choice words."

He's already heard one choice word come from a teammate since he shared his revelation with them. The teammate was quick to apologize.

"The immediate reaction from the guy who said it was something like, 'I'm so sorry, I'm trying to get rid of that. It's just a habit.' I got on him a little bit. But I let the team know it's OK and that they should just watch it. Time to focus on playing baseball.'"

The team's first game is March 1. Whitney said he will be playing outfield for the Warriors. He expects to play two years for Walla Walla Community College then transfer to a four-year college to earn a degree and play baseball.

You can find Chandler Whitney on Twitter @ChandlerWhitney. You can also reach him at chandler.r.whitney@gmail.com.

If you're an athlete and would like to tell your story, contact us at outsports@gmail.com. Cyd Zeigler can be reached at cydzeiglerjr@gmail.com. You can also visit GO! Athletes, the world's leading network or LGBT high school and college athletes.