College swimmer Jay Friestad on coming out to his Texas high school, then to his college team

Friestad grew up in Plano, Texas, and was fully supported by his high school team. He had to come out again at Div. 1 New Jersey Institute of Technology, and he was embraced.

Share All sharing options for: College swimmer Jay Friestad on coming out to his Texas high school, then to his college team

Jay Friestad grew up in Plano, Texas, where he was out to his high school swim team. He's now at Div. 1 New Jersey Institute of Technology where he is out on the swim team. He reached out to Outsports because he wanted to help break down homophobia in sports with his story. We caught up with him this week.

Outsports: When and how did you come out to your teammates in high school? Was it over the course of time? Or did you have a big coming out party?
Jay Friestad: During my sophomore year of high school I made it a conscious effort to come out of the closet little by little, letting my closer friends on the team know. Just testing the waters, as it is a very conservative area, eventually word started to spread to the junior and senior guys on the team. I was at first extremely apprehensive, but it ended up being a nonissue, which was an extreme relief for me.

Outsports: What was the reaction from your high school teammates?
Friestad:As I would tell people there was always a disbelief that occurred. I generally always got the reaction of "stop, no you can't be gay" or "but you don't act gay" or "you're always talking to girls though." It was kind of funny listening to all of the reactions of disbelief because I didn't think I was hiding it very well.

Sayers has found acceptance despite the casual homophobia she has heard for years.

Finnish Olympic swimmer Ari-Pekka Liukkonen, 24, has come out publicly as gay in reaction to anti-gay laws passed in Russia.

Outsports: Did you have any negative reactions to it?
Friestad: I almost always had very positive reactions among my teammates, with the exception of my junior year. A senior guy on the team never directly spoke any homophobic remarks to my face, but many of my friends on the team brought it up to me that this guy was talking about me. My friends on the team actually took care of that problem by basically just discrediting everything he said and telling him he has no place to judge anyone.

Outsports: Does religion play a role in your life? Did it? Are you from a religious family?
Friestad: I come from a very religious family, church every Sunday, prayers at the dinner table, prayers at night, all that good stuff. I myself am moderately religious, not to extremes but I do believe in god and the ideals that the Christian church instills in all of its members. I come from the Missouri Synod of the Lutheran Church, so my sexuality and the views of the church have somewhat been in conflict over the years, but one verse that has stuck with me even when the pastor said being homosexual was wrong during confirmation. It's John 3:16: " For God so loved the world that he gave his one and only begotten son, so that whoever believes in him shall not perish but have eternal life with him in heaven." This verse has helped me through so much of the struggles of trying to be in a religion where some people claim there is something fundamentally wrong with you, but the verse keeps my relationship with God strong.

Outsports: Where did you find support when you were closeted, and as you were coming out? Did you have any gay friends to talk to?
Friestad: I found a lot of support within my friend group and from my aunt. She knew before a lot of my family did, and was always supportive and an amazing woman who I could talk to about anything. As I was coming out I attended a sort of support group known as GALA Youth (formerly known as - Youth First Texas.) Through the support and help of all of these people I was able to come out with my head held up high. Oh I can't forget the Trevor Project, I have to thank the organization for all of the help that they provided me early on with resources as I was just figuring things out.

Outsports: We keep being told how homophobic it is in Texas, but here you are telling us you came out in high school in Texas, and you only heard one negative comment. Why is that?
Friestad: I'm coming to realize that my experience was a very lucky one. My high school isn't a school that's out in the boondocks where close-minded ideologies run wild. It's in in a very large city with many people. I believe the amount of acceptance I received was a direct result of the increasing gay presence in the country, I had started to come out to mimic that for those that I knew had a harder time than I did regarding their orientation or gender identities in my school. I do however believe that the state has come a long way from how bad it was in the past, because there's a known gay presence in my city and in Dallas which is nearby.

Outsports: How did you end up at NJIT?
Friestad: I was searching a for school that would satisfy my desire to compete at Division 1 level that I knew would have a more liberal state of mind. As much of a good experience I may have had during high school being gay, it wasn't enough. I always had to be on guard. So my searches for colleges were confined to area of the country that I knew had a large gay population, these places being California and the North East, specifically New York. NJIT fulfilled my needs for competition at a very high level and enabled me to move to an area of the country that is very accepting of gays. It was like a huge weight was lifted off of my shoulders to come up here.

Outsports: What events do you compete in? In which events are you the most competitive?
Friestad: I primarily compete in the 50 yard Free Style, 100 Yard Free Style, and 200 yard free relay, 400 Yard Free relay as well as the 100 yard breast stroke. I would have to say that my favorite and coincidentally fastest event is the 50 free.

Outsports: Did you walk in as an out gay man, or did you kind of go back in the closet?
Friestad: When I came to the school I still was in the Southern mindset of having to be cautious and guarded about who knew, so I came in as being in the closet once again but as time went on I realized that I had come up here so I could experience feeling truly comfortable with my sexuality, so I told the guys in various ways and it was the first moment in my life that it wasn't even questioned and no one thought twice about it.

Outsports: How did you tell them you're gay?
Friestad: The guys often times talk about girls they see when we're out, so I wanted to do the same and essentially came out to most of them by saying "dang he's hot" about a guy who was sitting around the room from us.

Outsports: And what was the reaction?
Friestad: For the first time in my life I received no weird remarks and no disbelief, just a few back pats and a "Really? He's you're your type?" It was pretty awesome to say the least. I really appreciated how easy they made it for me.

Outsports: OK, so you're telling me you've come out on two teams and both have been totally cool? What about the showers? Has there been some weirdness around the showers? We hear from lots of straight athletes like Jonathan Vilma that the showers have to be weird.
Friestad: Well to be completely honest the showers are weird for me, not because the guys on my team think it's weird but because the awkward feelings I used to have were self-perpetuated. It was more awkward during high school as I was guarded. But in college it's completely fine as far as I know. No one gives a shit because we're there to swim and I have enough of a brain to recognize when a situation is sexual and when it is not. We have a basic level of respect for each other.

Outsports: Do you have gay friends at NJIT? Any gay teammates?
Friestad: NJIT is a primarily male school so one would think that there would be a relatively high gay population, but I only have two gay friends here and one of which transferred this past semester to another school. There actually is one other gay teammate on my team who helped me come to the conclusion that I would be fine coming out to the guys. 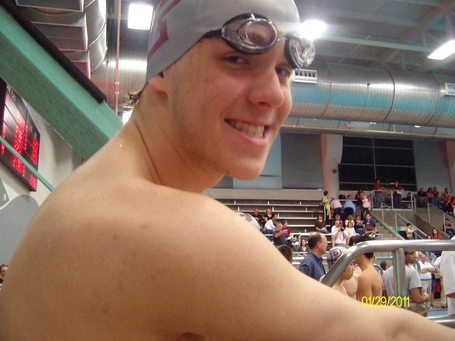