John Calipari on Derrick Gordon: 'You've gotta praise this kid for his courage'

Share All sharing options for: John Calipari on Derrick Gordon: 'You've gotta praise this kid for his courage'

Kentucky basketball coach John Calipari used to coach at the University of Massachusetts and one of his former players and later an assistant coach, Derek Kellogg, is now the head coach there. Calipari told USA Today that Kellogg reached out to him to discuss how to handle the public coming out of Derrick Gordon, the first openly gay Division I men's player.

Q: Your former player and colleague, UMass coach Derek Kellogg, recently stood behind Division I's first openly gay player, Derrick Gordon, when he came out to the public last week. What would you have done in Derek's shoes and in your opinion, do you expect there to be more gay student-athletes who reveal themselves?

A: Derek approached me on how to handle the situation and the first thing I told him was, 'You've gotta praise this kid for his courage.' It takes a lot of courage to do something like that. What does it all mean? I don't know. I do know about diversity in basketball, and our sport seems ahead of the curve on those kind of things. I had a family ask me 12-15 years ago how many white players I had and how many black players I had on my team. I didn't even know. I was proud of how Derek handled it. There's going to be backlash for (Gordon) but at the end of the day it should be about basketball."

I hope Calipari is wrong about Gordon facing a backlash, but admire the words he used. He's all about winning and I have no doubt he would react the same way to a gay Kentucky player.

Meanwhile, 1,500 UMass students marched in solidarity with Gordon and LGBT students on campus in response to a protest from five members of the anti-gay Westboro Bapist Church. I found this detail most amusing:

Seven students stripped to their underwear or Speedo swimsuits despite the chill. Senior Alex Kneemonkey said the message was "we're secure in ourselves," he said. Speedos, he said, represent what's considered gay. 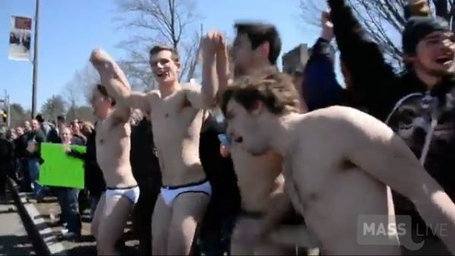