ESPN is not muting out the chants of the gay slur "puto" by Mexican fans during the World Cup broadcast between Mexico and Croatia. The chant is heard whenever the opposing goalkeeper does a goal kick. Mexico's next game is Sunday at noon EDT against the Netherlands and it will be interesting to see how widespread the chant is.

Podcast: The real meaning of 'puto'

The crowd's use of "puto" during Mexico games has been going on since 2003, but this year has generated real controversy because of its homophobic nature. Defenders say that the word means "cowardly" and is not homophobic but Mexico's governmental agency against discrimination disagrees and has called for its use to end.

ESPN has told Outsports that they do not have specific microphones on the field and that they use audio supplied by FIFA. However, surely they could easily mute the sound. It's hard to believe they would allow someone to say "faggot" on their air without muting or bleeping the slur. Either way, FIFA is clearly in full support of the word's use, or they would make sure their audio did not carry the chant.

Late Monday, an ESPN spokesperson told Outsports this about the chant being heard:

"One of our lead producers indicated that we did our best to mute the audio of the chant during the Mexico match today but are at the limit of our ability as the chant comes through the commentator microphones."

Andres Aradillas-Lopez, a Mexican-born economics of Penn State, who first alerted Outsports to the "puto" slur, said this:

"OK, as it has become obvious, neither ESPN nor Univision have muted the cheer, and the fans in the stadium have extended it beyond goal kicks to include now corner kicks and free kicks. Essentially every time the play stops and Croatia kicks the ball, they cheer it. This is way beyond the point of whether it is used as a gay slur or not in this particular instance.

"ESPN must answer to its American audience why on Earth they think broadcasting this slur multiple times in a game is OK. And Univision must answer too. They may be a Spanish-speaking network, but they are still operating in U.S soil, where something like this is unacceptable. The same day I wrote Outsports about this, I also emailed ESPN's ombudsman without a response. I have only one question for them: Why is it OK to broadcast the word "faggot" on TV? This is exactly what is happening here: A term with multiple connotations, ranging from "weak" to an outright gay slur is being yelled on TV. Is this OK because FIFA (the benchmark of morality) says it is OK?"


The word has become a hot topic Mexico in the last week and generated hundreds comments in social media, including dozens on the original Outsports story. David, a Mexican who defends the chant saying its not homophobic, wrote Outsports that in Mexico "they're trying to let our people know that they can't use it outside our country because they don't want Mexico to be punished during the World Cup."

David said the remark was a cheer not meant to offend:

"This yell is common but it is not used as an homophobic remark. It is used as a way to disagree with and distract the opposite team. It's like yelling whenever a golfer is about to hit the ball, or a basketball player is doing free throws. This is why it is done exactly when the goalkeeper is about to hit the ball, the fans only want to make sure the opposite team feels the pressure of them as a goal kick takes place, Even our commentators remark on it  but they called it a ''war cry.' "

Mario, a gay Mexican, takes strong offense to the word, as he wrote in a comment on the original Outsports story:

"As a Mexican who lives in Mexico I can tell you that Puto is used as a derogatory term for gay people. 'Puto' means male whore, as a man who sleeps with other men for money. I can tell you this first hand, since I am an LGBT person and I have been used this words against me many times.

"Yes, the word 'puto' can mean coward, but that's in the sense of being unmanly, i.e. gay. And in the context of football, what the crowds are chanting translates literally as 'faggot.' Now imagine that word being chanted around the world each time a goal kick happens."

FIFA investigated Mexico for use of the chant but on Monday said it is not a gay slur in the context it is used,

This meme is making the rounds on Mexican social media, which points out the offensive nature of the "puto," despite what its defenders and FIFA say: 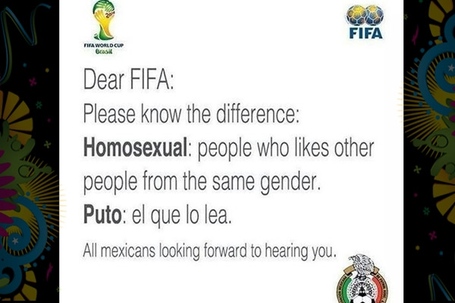 "Puto el que lo lea" translates to: "Whoever reads this is a fag."