FIFA investigates Neymar for his choice of underwear

The Brazilian star was seen wearing underwear not officially licensed.

Share All sharing options for: FIFA investigates Neymar for his choice of underwear

FIFA, which has declared a gay chant by Mexico fans at the World Cup is not homophobic, has turned its attention to a far more serious matter -- the underwear worn by Brazilian soccer star Neymar.

On Monday, the Barcelona striker was spotted wearing a pair of Blue Man boxers featuring Brazil's yellow and green flag against Cameroon. The only problem? Blue Man isn't a FIFA World Cup sponsor.

According to Brazilian media reports, Neymar, 22, is now being investigated for his choice of underwear with FIFA claiming that it violates its disciplinary code, which prohibits players from displaying religious or political messages as well as publicity slogans and non-FIFA sanctioned products.

It is truly a scandal, as Neymar was brazenly flashing his undies after the Cameroon match: 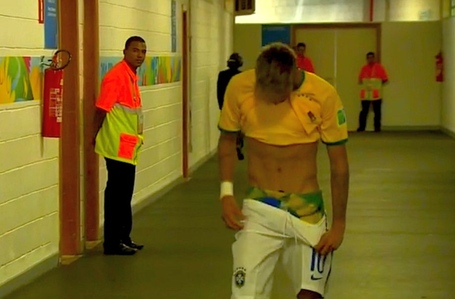 After Brazil's thrilling penalty shootout win over Chile, Neymar's underwear made a TV appearance during the celebration and it was the same pair (I assume he had washed them). Neymar is among a half-dozen Brazilian World Cup players to appear in You Tube's "Proud to Play video supporting gay athletes. As far as I'm concerned, he can wear any underwear he wants and FIFA should just shove it.