Connor Taras, Olympic hopeful, gets 'gay super power' and new outlook on life after coming out

Connor Taras, a sprint kayaker, was kept from the 2012 Olympics by his struggles in the closet. Since coming out as gay last year, Taras has found a new “gay super power.” Look out, 2016.

Share All sharing options for: Connor Taras, Olympic hopeful, gets 'gay super power' and new outlook on life after coming out

Connor Taras waged a struggle with his sexual orientation that nearly chased him from his sport at training camp in 2012.

The Canadian sprint kayaker was in Florida setting his sites on the Olympic Trials that would determine his Olympic fate that year. He knew this could be the only opportunity to fulfill his Olympic dreams - Four more years of training before 2016 would be a daunting task and he wasn't sure he wanted to take that leap. Making it to the London Olympics was an all-consuming endeavor.

John Fennell talks about being gay in Russia for the Olympics and the fear that instilled in him.

I am Charline Labonte, and I'm gay

At least, that's how it was supposed to be. Instead, even as he took aim at the Olympics, Taras was sinking into an emotional black hole approaching depression. He had already forced himself into a life of isolation at training camp. Once the social pied piper of his team, his life suddenly consisted of training, eating, and locking himself in his room. Taras' increasingly powerful attractions to other men was the secret that began to consume his life and his Olympic dreams.

Like so many closeted gay men, Taras put up a front, pushing a public persona that was straight as Hugh Heffner.

"Every day it was a constant game making sure I didn't sound a certain way," Taras told Outsports last week. "It's not that I wasn't myself, but I wasn't my whole self. Picking the right words to say, always trying to do the stereotypical things other guys were doing."

It didn't hurt that Taras was at the top of his sport in Canada. In 2007 he was in the first Canadian crew boat to win a medal at the Junior Worlds - silver in the K2 500-meter (K2 means two people are in the boat). He narrowly missed a spot on the Canadian Olympic team in 2008. In 2011 he placed first in the K2 200-meter national trials. He was a stud, the model "straight man."

At training camp in 2012, that façade came crashing down around him when a teammate asked him the question he had dreaded for years:

Other athletes have said they always hoped someone would ask them that very question, as though it were a lifeline they wanted a journalist or teammate to drop for them. John Amaechi said in 2007 that if a reporter had posed the question while he was still in the NBA, he would have answered honestly, relieved that someone was opening the closet door for him.

That very question sent Taras into a tailspin.

"It made me think that people are actually thinking I'm gay, and that made it way more stressful. It verified my fear that other people were thinking I was gay."

While the teammate had gay friends and would have been completely accepting of his gay teammate, Taras wasn't ready. He denied the truth and doubled his efforts to put forward a straight image.

That didn't stop the truth from consuming him. Taras isolated himself even more. Much of his daily routine was consumed sleeping in his room to avoid thinking about being gay.

"I knew I was gay but I always hoped that maybe I wasn't, maybe I would change. Maybe I could hide it for the rest of my life. When I look back at the feelings of it now it's really hard to remember. It's like getting into a bad accident, you just forget it all. It's like I blacked out during it. I think my mind has just tried to forget it all."

Consumed mentally with hiding his sexual orientation, Taras put forward a disappointing performance at the Olympic Trials, missing the Canadian Olympic team by 0.661 seconds. After four years of training for this one shining moment, Taras' body was not able to overcome the struggles in his mind.

"I was in a total funk. It was miserable. I just had to get away from everything."

So he did. After the 2012 Olympic Trials he packed up and moved back home to Halifax. He put no athletic expectations on himself. This was his chance to figure out what the next four years of his life would look like, and whether he could find the strength to be himself and chase his dream one last time.

"I had lost all of my confidence that year. I was always the really social guy on the team, but I had really stepped away from that and kept to myself a lot. I decided I had to find confidence in myself again before I found confidence on the water."

Back home in Halifax he was living on his own for the first time. No family in the living room, no coaches at morning and afternoon practices, no teammates at dinner. Whereas his seclusion at training camp felt like a prison, being out on his own now liberated him. He did some soul-searching about four more years of training aimed at the 2016 Summer Olympics, and he explored his feelings about men.

Living in his hometown, Taras became present with one of the big pressures holding him back from being his true self. He had been raised in the perfect little family and the perfect little town. He had a father, a mother, a brother and a sister. To him, that's what a family looked like and he wanted very much to have a family of his own.

"It's a very stereotypical environment with a strong family feeling. I thought that I always wanted to have that. That was the biggest thing for me. That's the biggest reason I struggled with being gay."

Pushing against those dynamics was the inevitable hope for a relationship like the ones suddenly surrounding him. While his family and his friends and teammates were all finding someone to love, Taras felt increasingly unfulfilled with no one to share his life.

"All of my teammates were dating and getting married. It was a constant reminder that this was something I wasn't going to be able to have. I'd go out to parties with them, and when other guys would go and talk to the girls, it would never felt natural for me. Those were the times it just sucked."

He returned to paddling early in 2013 with a renewed dedication to his sport but still struggling to accept his sexual orientation. He would lie in bed through most of last year telling himself over and over that he did not need a wife to find the happiness so many around him had found. He convinced himself that the picture-perfect image of the family with the white picket fence didn't have to be his image of the perfect family.

"The more and more I said it to myself, over and over, the more comfortable I became with it."

One evening last November, finally able to accept himself as a gay man and getting back on track with his training, he came out to two teammates. Like so many LGBT people who came out before Taras, alcohol helped.

He feared waking up the next morning with regret. He'd spent the first 24 years of his life committed to keeping a secret - in one mildly intoxicated split-second decision, he'd suddenly changed the course of his life. He feared it was for the worse.

Instead, he was overwhelmed with a sense of liberation. Within two weeks he had come out to all of his close friends and his family. His entire team knew, and word was spreading to other corners of his sport. The reactions were all supportive. 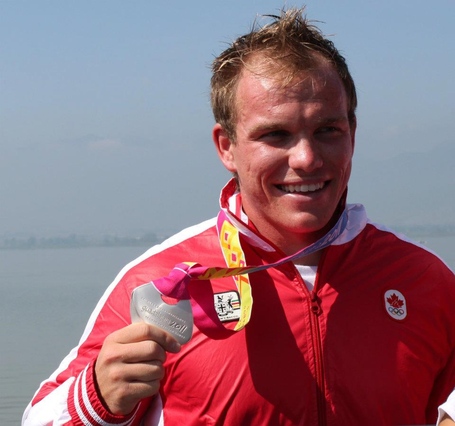 While his confidence had been in the toilet the previous two years, suddenly he felt like a new man. That translated into a new paddler on the water.

"My training times and everything I did suddenly improved ridiculously. All of the weight had been lifted off of my shoulders. It felt like I suddenly had some new gay super power."

In the K-1 1000-meter this year he has shaved almost 5% off of his best time from last year, jumping from No. 17 to No. 5 in Canada. In August he'll compete in the trials for the national team, which will be named in October.

"The bigger and the louder voice we can all create as gay athletes, the quicker this will not be an issue anymore."-Connor Taras

After missing out on the London Olympics struggling as a closeted man, Taras is laser-focused on making it to the Rio Olympics out and proud.

"Going to the 2016 Olympics openly gay would mean that I am able to live my dream even while being true to who I am. It would mean that being gay in sport didn't determine my result, but rather it was my passion and will to succeed."

As an athlete training vigorously for a spot on the 2015 national team, Taras hasn't had time to venture out into the gay community and make friends. However, he has been able to find an important connection with his boyfriend, Robert, who lives in Sweden. Robert isn't just his first boyfriend, he's Taras' first true gay friend.

Taras is hoping to make some new gay friends this weekend. On Saturday, the Canadian Olympic Committee will have a float in the Halifax Pride Parade - Taras' home town. He'll be on that float, attending his very first gay pride. The timing of Taras' coming out isn't a coincidence - He wanted very much to march openly in the Pride Parade and proudly represent his sport and the Canadian Olympic Committee.

"I just want people to know who I really am. I'm not ashamed of it anymore."

He's now ready to share his new-found acceptance with the rest of the sports world. He said reading the coming-out story of Olympic luger John Fennell earlier this year helped cement in his mind the importance of providing for other athletes what he was so desperately needing in his sport at the height of his personal struggles.

"The more and more people who step up and say they're gay, we'll eventually put an end to younger athletes being scared to be who they are in sports. If I can show a paddler or someone in soccer or another sport that I still have my friends and teammates and I can compete for a spot in the Olympics, if I can show just one kid that, I've done what I'm hoping to achieve."

The Toronto Star has a complimentary piece about Taras by Bruce Arthur. You can read it here.

You can follow Connor Taras on Twitter @ConnorTaras. Also, check out his Web site at connortaras.ca. For more information on initiatives to support LGBT athletes, visit the You Can Play project.